I assume that since The Oregonian features many editorial cartoons from around the nation on Saturdays, that they have a choice in what they provide to the public. Last year at this time it was  mentioned on how The Oregonian ran a flood of cartoons painting conservatives as blood thirsty killers while passing on several other very funny cartoons published elsewhere.  Now we have The Oregonian’s choice of a cartoon that links Republicans to serial child rapist Sandusky (of Penn State  rape scandal fame). That is uncalled for, unprofessional and disrespectful to the victims rape.   See image below. 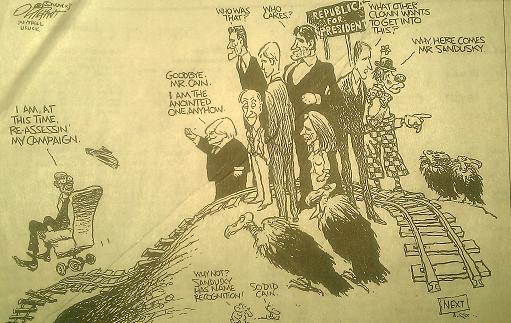 The 2008 Democrat primary race was a roller coaster, but could you image  The Oregonian publishing cartoons comparing Hillary Clinton or Obama to child rapists? I didn’t think so.

I have no problem with allusions of politicians as clowns or vultures, but child rapists goes to far.