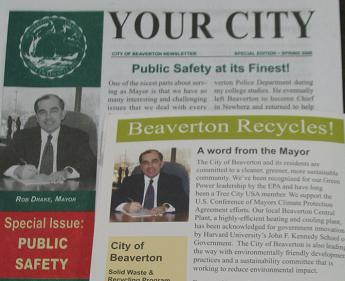 Jason Williams, Beaverton resident and Director of the Taxpayer Association of Oregon stated “Distributing full color pictures and letters from the mayor in the middle of race at taxpayer expense amounts to taxpayer funded propaganda of the mayor’s race. Mayor Rob Drake needs to apologize for authorizing this abuse of taxpayer funds and work to reimburse the city for the mis-use of tax dollars. “

The Taxpayer Association is calling for four measures to be enacted:

The “Your City” newsletter, featured the front page picture of Mayor Bob drake and his full page letter. There is nothing in the newsletter that actually provides any news of service to the residents of Beaverton. The 2008 Beaverton Recycling Guide on page two features a full color photo and letter from Mayor Rob Drake.

Jason Williams further stated, “The City newsletter states it is a “˜special edition Spring’ mailing. There is absolutely no substance or news of any value in the mailing warranting a special edition or alert to citizens. The fact that the mailing arrived on the very day ballots arrived must mean “˜special edition’ means special “˜electioneering’ edition. The role of city government is not take people’s money and spend it on telling the same citizens how wonderful they are. Our tax dollars would be better served if it went towards fixing potholes, funding cops, reducing traffic and supporting our fire department.”