If your singular focus is to elect a president that can reduce federal spending regardless of what party holds congress, then Ron Paul is your man.

If any Republican primary voters out there did not watch Obama’s State of the Union address so as to avoid listening to a laundry list of things the federal government can do for you, I suggest you go ahead and do so. Here is a link. I then challenge you to find in its content things Newt Gingrich would never say in 2013 if given the same platform with those bright lights that seem to radiate down from heaven on the U.S. head of state as if to say “this is my son in whom I am well pleased.” 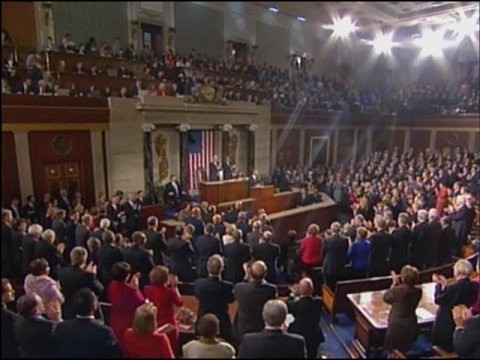 Obama was Gingrich on Tuesday night less because of his justified confidence in the prospects of running against a candidate with more baggage than Greyhound afforded Obama the opportunity to deliver a more centrist and less partisan message than many were expecting; no, the reason Gingrich could have delivered that speech was because his confidence in his own genius prompts Newt to support policies that expand the power of the federal government with the same gusto as progressives do when he thinks they support a conservative end or consolidate his power.

Used to having presidential primaries decided before we even vote, this year Oregon will have more influence than New Hampshire for a change. When any contest remains competitive to the end, be it a sporting event or a wide open election, the most interesting part to watch is at the finish line and our May 15th primary will put us in the 4th quarter of this game. Oregon has 25 pledged delegates to give proportionally to every 3.5% of the vote. Allen Alley Chairman of the Oregon Republican Party and Oregon’s two RNC members Solomon Yue and Donna Cain each will also represent Oregon as independent delegates at the national convention in Tampa Bay, Florida. The Republican presidential candidates are going to be competing hard for Oregon’s votes like never before, and my suggestion to all Republicans is to give this some thought for a change. Don’t just vote for the guy who seems to be on top at the moment. If every Republican primary voter was guided to vote for a candidate that best reflected his core values, then there is no way Newt Gingrich could win the nomination saving both the Republican Party and the country a lot of grief.

If you are a cultural conservative and would like to vote for Santorum, do it. I know most of my extended family will. Rick Santorum is no less electable than Newt Gingrich. Assuming that after he resigned from the House Speakership in disgrace Newt’s political career was finished, investigative journalists and opposition researchers have yet to really take the time to dig for the things we have never heard of. Even his supporters expect Obama’s campaign to find a treasure trove in Newt’s closet, not a skeleton or two, more like a graveyard.  I know many evangelicals who do not find it their place to judge Newt for his repeated marital infidelity but they do see an alarming connection between his consistent display of the deadly sin of pride with its corresponding vanity and arrogance that has repeatedly prompted Newt to bend rules and breech trust when no one was looking. With Rick Santorum, even voters who disagree with his strong positions respect his integrity.

If you are one of those few voters that are primarily driven by a form of national security conservatism that demands more defense spending, sparing no expense on the latest most advanced weapon systems to support more intervention in the world’s affairs, then Rick Santorum is probably your guy too. Newt Gingrich may be more eloquent in quoting southern generals’ desire to kill the enemy, but his propensity to dream up things outside the scope of Article I Section 8 of the constitution like a mission to mars will compete against defense spending for scarce dollars.

If your singular focus is to elect a president that can reduce federal spending regardless of what party holds congress, then Ron Paul is your man. In Ron Paul you would have got a President that would veto every spending bill if need be to force deep cuts. Representing no constituency of stakeholders in federal spending he would have no disincentive from shutting the government down. The best way to win a game of chicken is to tear out your steering wheel and hand it to your opponent before the race. Democrats would cave before they let the government remained shut down for four years. Any override of Paul’s veto would require a supermajority in both chambers that would allow congressional Republicans even in a minority position to dictate terms. Only Ron Paul would be in a real position to forge a deal with congress to impose real cuts. Does anyone really think Newt Gingrich, a staunch defender of the creation of Medicare part D, would cut government spending at all?

Perhaps the answer to this question is most evidently revealed in Newt’s repeated defense of government sponsored enterprises, disingenuously likening Freddie Mac to nonprofit credit unions:

Perhaps more troubling is Gingrich’s failure to admit he was wrong, incredulously blaming the financial crisis on the Federal Reserve’s RAISING of interest rates, something that was inevitable to mop up the artificial liquidity and fight the very inflation the fed had created to support the government’s intervention into the housing market:

If you are a moderate Republican, preferring managerial competence over any particular policy agenda, Mitt Romney is obviously your man. Romney has built a long track record of taking over failing organizations that are internally at war with themselves, forging a common purpose to turn the situation around. I think it is a mistake to say Romney has no core. Crafting deals to move people forward is his core. I think there might be something to be said for executive skills that only governors and CEOs posses. Most people fail in these positions, but the few who repeatedly excel bring a unique quality of leadership with them that few politicians offer.  What Ron Suskind’s books on both the Bush and the Obama administrations make clear, it was not their ideologies that failed them, it was their execution. Bush could connect with people one-on-one very effectively and Obama can connect with audiences like no other, but neither was very effective at leading organizations. With Mitt Romney there would be no shooting from the hip, no eloquent speeches, just Bowles Simpson like deals forged in an efficient manner one after another, probably starting with Bowles Simpson itself.

Newt Gingrich has no natural constituency. Only those who fall for style over substance could possible think that simply because Newt is by far the best debater, he would make a better president. Newt would no doubt be a great communicator, but to what end? To flaunt his own vanity? To sell brilliant new federal programs? So many have wondered what is at Romney’s core. Who is asking what is at Gingrich’s core? When voters finally do, perhaps his long love affair with Franklin Delano Roosevelt might be helpful.

No American president has ever wielded power more effectively than FDR, and perhaps no presidential candidate has lusted for power more than Newt Gingrich. That is his core.

The irony here is that Newt’s support comes from the desire to create an alternative to Romney when he is actually to the left of Romney. It is important to remember why Romney has a moderate record. He did what none of his three Republican rivals could ever do: govern Massachusetts. Gingrich has supported even more big government causes than Romney, but did so from a safe Republican district in Georgia, as Speaker of the House in a time of conservative resurgence, or as a hired gun on K-street. To win the South Carolina primary, Newt actually campaigned to the left of Romney, intentionally whipping up class warfare among the angry voters of that state more effectively than Obama ever could. That was in a Republican primary! Imagine what he would do with the bully pulpit. A Gingrich administration would tarnish the Republican brand with more than just the problems of big government conservatism. Republicans would likely end up facing liabilities of the Nixon variety. To avoid this, all Republicans need to do is vote for their first choice; otherwise a year from now they will find themselves sitting through the same speech they heard last Tuesday.