Judging by the responses to recent posts by Steve Buckstein and Kathryn Hickok, there is a great deal of confusion about the actual costs of a public and private education in Oregon. This post is an effort to reduce some of that confusion.  Where possible I have relied on the Department Education and the National Education Association.

The costs of education per student in the United States averages $10,800  (See Department of Education cited report below.)  The National Education Association reports that in the 2010-2011 school year Oregon spent on average $12,386 per student on an Average Daily Attendance basis and $10,959 on a Fall Enrollment basis.  Those numbers are for Current Expenditures only, and do not seem to include capital outlays, interest on school debt, and future pension costs.
http://www.nea.org/assets/docs/HE/NEA_Rankings_and_Estimates010711.pdf  Pg. 96.

Several of the responders mentioned $6,000 per student as the state cost.  As Steve pointed out that is only the amount the State of Oregon gives each School District.  It does not include funding from local property taxes, on-going federal funding, bonds, and capital costs.  Yes, some of the 2009 stimulus money may have dried up, but that stimulus topped up existing federal funding.

Cato has come up with national numbers (1970-2010) based on federal government sources. 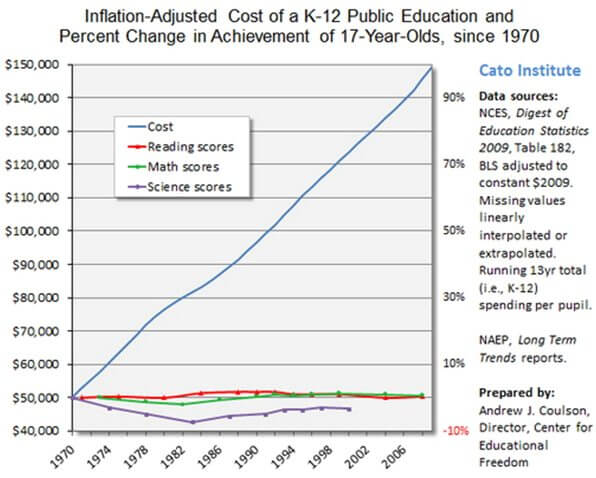 Tuition for private schools like Jesuit is not a good indication of actual costs of educating students, because the parents who are able to pay subsidize students who need financial assistance.  Having the well-to-do subsidize the less well-to-do, is an almost universal practice in private schools and colleges – unless those institutions have very large endowments and/or can raise charitable contributions for operating expenses.

The actual cost per student for most lower budget Catholic schools is probably about $6,500 per student.  Veritas, a Christian school that concentrates on the classical liberal arts education, charges something like $6,500 per year.  I have been told that the test results for graduating Veritas students compare favorably with those of most other schools in Oregon.

Many private schools manage to beg and borrow space, and they have a some  volunteer teachers.  They can get by on $3,000 a year per student.  A $1700 Childrens’ Fund Scholarship to a lower tuition private schools is certainly significant – particularly since very low income students would be eligible for other financial aid.

Connections Academy educates children for less than the $6,000 state component.  The county hosting Connections Academy collects from the State, pays Connections, and then splits the remainder with the home school district of the Connections student.  Although Connections is a for-profit operation, they are educating our children at significantly less than half of what we are paying for regular public schools in Portland.  There are of course all sorts of obvious reasons why that is possible.

Although it varies from district to district and school to school, in general, charter schools in this state get less public funding to educate children than regular public schools.  Some studies (http://www.nwceo.org/pdf/NWCEO_Charter_School_Funding_Study_May_2010.pdf

come up with estimates of less than 55%, although I suspect that the virtual schools take down the average for public schools as a whole.  Charter schools may also raise money by soliciting charitable contributions.  (e.g. Self Esteem Institute).

US as compared to International per student costs

One of the people who posted claimed that the US spends less per capita on education than most other countries in the world.  This is not true.  My data is from Comparative Indicators of Education in the United States and Other G-8 Countries: 2011October 2011, NCES  http://www.edpubs.gov/document/ed005289p.pdf?ck=704

The following are quotations from that Department of Education Report

In 2007, the United States ranked the highest among the G-8 countries in terms of expenditures per student at the combined primary and secondary education levels as well as at the higher education level.

In 2007, the expenditures per student in the United States were about $10,800 at the combined primary and secondary education levels and about $27,000 at the higher education level. Both figures were higher than the per student expenditures in all other G-8 countries, which ranged from about $4,900 in the Russian Federation to $8,600 in the United Kingdom at the combined primary and secondary levels. . . .

This Department of Education study also reported that US starting salaries for teachers are higher than any of the other G-8 nations except Germany. Nevertheless, our scores in every subject are well below the average of G-8 nations. This holds true when we are comparing our strongest students to their strongest students and when we are comparing our most economically disadvantaged students to their most economically disadvantaged students.

In the sciences and math we are near the bottom of the pack.

It seems that we are spending more and getting less K-12 education for our money when we are compared with other nations.  Our education system is not working.