My book was released last Friday, but I have had the initial idea for its content over a decade. In fact I first imagined a major realignment in American politics at an Alpha Tau Omega frat party at Hillsdale College in 1999. A friend of mine was taking Burt Folsom’s course on the Economic History of the United States and was telling me all about William Jennings Brian and the days when the Democratic Party was the party of cultural conservative values. As he was talking, in the back of my mind I remembered how my parents were registered Democrats in 1988 and both voted for Richard Gephardt in the presidential primary because he ran as a Pro-life alternative to Michael Dukakis. Gephardt never entered the presidential primary for the 2000 Democratic ticket, but I pondered what would happen if he went to Evangelical organizations seeking their support.

What if in 2000 Gephardt mounted a populist insurgency against Al Gore? It would primarily have been about economics, offering the base of the Democratic Party an opportunity to hold a referendum on the free trade policies of the Clinton administration. In the run up to the vote for NAFTA, Gore had famously mopped the floor with Ross Perot’s weak advocacy of protectionism on Larry King Live. In addition to trade policy, Gephardt could have contrasted himself with Gore on the way the values of the affluent supporters of Gore’s environmental agenda helped price American manufacturing out of the global market that Gore’s free trade advocacy helped create.

Gephardt essentially did this in 2004 in a crowded race when the Iraq War dominated the discussion and unified the Democratic Party. In 2000, the Democratic base was divided to the point that a third seemingly unthinkable distinction could have been added to his populist message to separate himself from the Democratic Party’s affluent establishment (what Ralph Nader that year referred to as the “Wall Street Democrats”). That third distinction could have been social conservatism. Gephardt could have gone to James Dobson and said something like this:

I will give you everything you want on cultural matters. Prayer in school? You’ve got it! A Constitutional amendment to ban gay marriage? I can do it! All I need is your support and your acceptance of my desire to increase taxes on the wealthiest income earners to pay for programs that will look out for “the least of these my brethren.” You don’t have a problem with that do you James? After all those big incomes primarily give to organizations like the ACLU and Planned Parenthood anyway, the more we tax them the less they have to give to their “secular humanist” causes.

A political coalition of organized labor and evangelical churches would be tough to beat. The emergence of this “communitarian party” that is populist on both economic and cultural issues is a trend that I have been following over this past decade. When the stars align for the right candidate, it will suddenly seem obvious and American politics will undergo a remarkable realignment.

It is important to keep in mind that we have been here before. Between 1908 when William Jennings Brian lost his last bid for the presidency to William Howard Taft and the 1925 Scopes trial, American politics had gone through a remarkable realignment. In 1908 evangelical Christians were an essential component of the Progressive movement, and labor lawyer Clarence Darrow was a critical ally to Brian. By 1925 evangelicals were easily cast aside by the Progressive movement as Brian prosecuted John Scopes and Darrow defended this science teacher who had broken Tennessee state law by teaching evolution. Darrow lost the case but humiliated Brian in the court of public opinion.

My book is primarily about identifying the process that drives these changes, to help the reader understand where we have been and where we are going regardless of where he might fall on the political spectrum. I had written a very long manuscript, whose size alone would have intimidated people from reading it, but with the help of a very talented editor, I was able to condense it down to a 62 page monograph that could be read in one sitting. Part introduction to political theory and part application of political theory to predict where our politics are headed, I would be very interested in your comments. 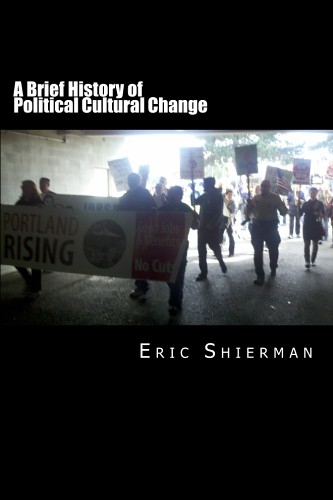 The kindle version is only $2.99. If you do not have a kindle device, the kindle e-reader software can be downloaded from Amazon.com for free and is available as a free app on any touch-screen smart phone. If you have yet to enjoy the advantages of using kindle’s search functions, instant dictionary, and cheaper prices, I would be honored if my book was your first kindle purchase.

Eric Shierman also writes for the Oregonian’s My Oregon blog.  He lives in Portland.