Here in Oregon, if you are employed by a company or an organization that uses union labor, you will be forced to join the union and/or pay dues. Right-to-work states do not require workers to join unions and pay dues.

According to a new study by Cascade Policy Institute, if Oregon were to allow workers the freedom to choose to be a member of a union and allow businesses to hire non-union workers, it would lead to 50,000 new jobs in five years.  The high cost of employing union workers drives many businesses away from forced-union states.

A right-to-work Oregon would also lead to 14 percent more taxpaying families moving to Oregon each year and $2.7 billion more in wages and salaries for Oregonians.

The best part:  It costs taxpayers nothing. 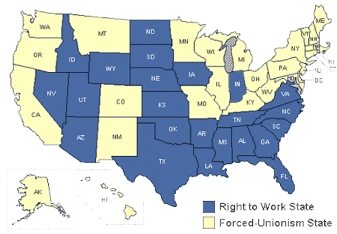 Copyright © 2012 The National Right to Work Committee. Used with permission.

In fact, if you applied the average Oregon income tax rate to the state personal income gains identified in this report, Oregon state government would take in $233 million in new taxes each year. That is revenue relief many state legislators might look forward to, considering the current budget gap of over $200 million this session.