I have just finished reading Daniel Kahneman’s masterful summery of his life’s work Thinking Fast and Slow. A psychologist who won the Nobel Prize in Economics in 2002, I recommend this book as a great introduction to the exciting new field of behavioral economics. 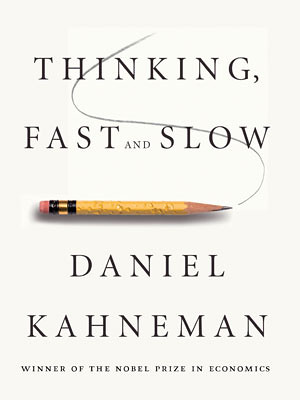 The term “fast and slow” refers to what cognitive science calls System 1 and System 2 thought patterns. System 1 is the intuitively instinctual gut feelings which come to us involuntarily that Malcolm Gladwell popularized in his book Blink. System 2 is the rational scrutiny that we must intentionally use when we focus our thoughts on a given problem. Our brains constantly shift gears from System 1 and System 2 throughout our day. Applying these concepts in empirical ways to economic actors is revealing a number of insights about human action that have clear public policy implications. Most of his work centered on the development of Prospect Theory, for which he won his prize. Most of the book is devoted to it and its applications in finance. I would like to share with you two other concepts from his book that have gotten less attention.

One is the limited role that education can play in overcoming inherent personality patterns. Much has been written about the way intelligence is inherited and determinative of later life outcomes. Most of this nurture vs. nature issue visualizes intelligence as a matter of how powerful the brain is, not unlike how we would say one computer is more powerful than another. Kahneman shows how behavioral economics has developed a different approach by measuring children’s ability to shift between System 1 and System 2 thought:

In one of the most famous experiments in the history of psychology, Walter Mischel and his students exposed four-year-old children to a cruel dilemma. They were given a choice between a small reward (one Oreo), which they could have at any time, or a larger reward (two cookies) for which they had to wait 15 minutes under difficult conditions. They were to remain alone in a room, facing a desk with two objects: a single cookie and a bell that the child could ring at any time to call in the experimenter and receive the one cookie. As the experiment was described: “There were no toys, books, pictures, or other potentially distracting items in the room. The experimenter left the room and did not return until 15 minutes had passed or the child had rung the bell, eaten the rewards, stood up, or shown any signs of distress.”

The children were watched through a one-way mirror, and the film that shows their behavior during the waiting time always has the audience roaring in laughter. About half the children managed the feat of waiting for 15 minutes, mainly by keeping their attention away from the tempting reward. Ten or fifteen years later, a large gap had opened between those who had resisted temptations and those who had not. The resisters had higher measures of executive control in cognitive tasks, and especially the ability to reallocate their attention effectively. As young adults, they were less likely to take drugs. A significant difference in intellectual aptitude emerged: the children who had shown more self-control as four-year-olds had substantially higher scores on tests of intelligence.

This is more widely known as the “marshmallow test” because it has been repeated more definitively at Stanford University using a marshmallow and has been independently verified many times using other treats.

Kahneman goes on to show how these children’s behavior can be explained as a variance in System 2 ability. People more prone to singular System 1 thought are more impulsive and he even uses the term “lazy.” Think about this. At the age of 4, before a child has been exposed to a good or a bad school, they already posses the traits that will determine their outcome later in life.

This insight from behavioral economics undermines the underlying assumptions of SB1581 that assumes that smart education policy “experts” can direct state education money in a top-down approach to craft a one-size-fits-all model of an excellent school. Different children with different cognitive control have very different education needs. No education investment board advising our governor could possibly find the right fit for every student as efficiently as a bottom-up approach where parents, as consumers, identify the right schools for their children whom they can asses better than any standardized test. If parents directed the flow of those education dollars, it would create a specialized market of schools that would cater to each different kind of personality, a personality that was forged into every student long before they entered their first classroom.

Another discovery from behavioral economics, called the “availability bias,” is that tendency of decision-makers to give preference to vivid images that evoke emotions or isolated anecdotes that they personally observed. Kahneman describes how a clearer understanding of this glitch in our rationality has enable legal scholars like Cass Sunstein to better understand how regulatory policy which should protect society, often does more harm than the risk it was trying to protect us from:

Sunstein came to understand that biased reactions to risks are an important source of erratic and misplaced priorities in public policy. Lawmakers and regulators may be overly responsive to the irrational concerns of citizens, both because of political sensitivity and because they are prone to the same cognitive biases as other citizens.

Sunstein and a collaborator, the jurist Timur Kuran, invented a name for the mechanism through which biases flow into policy: the availability cascade. They comment that in the social context, “all heuristics are equal, but availability is more equal than the others.” They have in mind an expanded notion of the heuristic, in which availability provides a heuristic for judgments other than frequency. In particular, the importance of an idea is often judged by the fluency (and emotional charge) with which that idea comes to mind.

An availability cascade is a self-sustaining chain of events, which may start from media reports of a relatively minor event and lead up to public panic and large-scale government action. On some occasions, a media story about a risk catches the attention of a segment of the public, which becomes aroused and worried. This emotional reaction becomes a story in itself, prompting additional coverage in the media, which in turn produces greater concern and involvement. The cycle is sometimes sped along deliberately by “availability entrepreneurs,” individuals or organizations who work to ensure a continuous flow of worrying news. The danger is increasingly exaggerated as the media compete for attention-grabbing headlines. Scientists and others who try to dampen the increasing fear and revulsion attract little attention, most of it hostile: anyone who claims that the danger is overstated is suspected of association with a “heinous cover-up.” The issue becomes politically important because it is on everyone’s mind, and the response of the political system is guided by the intensity of public sentiment. The availability cascade has now reset priorities. Other risks, and other ways that resources could be applied for the public good, all have faded into the background.

Kahneman goes on to explain how this leads to very irrational environmental policy, going into the details of two classic case studies, the Love Canal affair and the Alar Scare. I think the availability cascade can just as easily explain American foreign policy for this past decade.

Those were but two of the many contributions that behavioral economics has made to our understanding of the limits of public policy. This line of research has proven so fruitful for three reasons. First, it has helped broaden the scope of economics beyond the traditional realms of money and markets. Economics is really about human decision making under the constraint of scarcity, not just the scarcity of resources, but the scarcity of information as well. Second, the perfect information assumption of neoclassical economics and its model of perfectly rational actors, while having some merit for modeling, has reached its limit in teasing out a greater understanding of real human behavior.

And third, Daniel Kahneman shared his prize with Vernon Smith who has pioneered a new frontier in experimental economics. In a new approach, behavioral economics has taken a step back from mere data mining in the search for correlations that then hits a brick wall when trying to assert a causal explanandum. Behavioral economics puts real people through clinical trials of choice-making under controlled conditions.

If you want to follow the latest work in this field, keep your eyes out for the name Abel Winn. As Smith’s most promising doctoral student, Winn became the director of experimental economics at the Market-Based Management Institute. When Smith left George Mason University to found the Economic Science Institute at Chapman University, he was able to recruit Winn along with a dream team of new researchers to chart a new path for the study of economics. The more we learn about how people actually behave, the more we realize how limited lawmakers are in engineering society toward some ideal outcome.