The Professional Planner Class in Portland plans to declare seven areas of town “blighted” –including Portland State University– to set up seven new urban renewal zones, and hand over the money to government and non-profit cronies.

Call it “Cash for Cronies.” 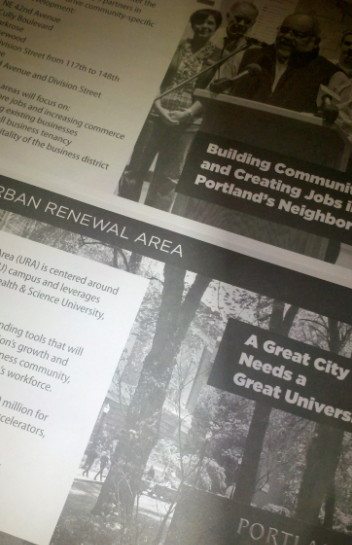 It’s all in an effort to “create jobs” and “help business.”

How giving tax dollars that would ordinarily go to supporting police, fire and schools over to government and non-profit professional grievance groups will help create jobs is anybody’s guess. We saw this type of thinking in the President’s “stimulus” plan which used our tax dollars to “create” jobs that cost $278,000 apiece.

Oh, but this is so much more! In fact, it’s a plan a Multnomah County leader has admitted is, “radical.”

According to the new website set up to support the plan and a flyer giving a glowing description of the new urban renewal zones, this ain’t your mama’s urban renewal.

“…[I]it’s a use of urban renewal that is radically different than anything we’ve seen before.” Jeff Cogen, Multnomah County Commission Chair

What does it do? Well some very nice things in the areas of town which will now be taken off the tax rolls for the duration of the Urban Renewal Area. The money that would have been paid in increased taxes to support police, fire and schools will be skimmed off and given out to do these things (see the chart nearby on what Tax Increment Financing, TIF, does to the areas in which it’s used): 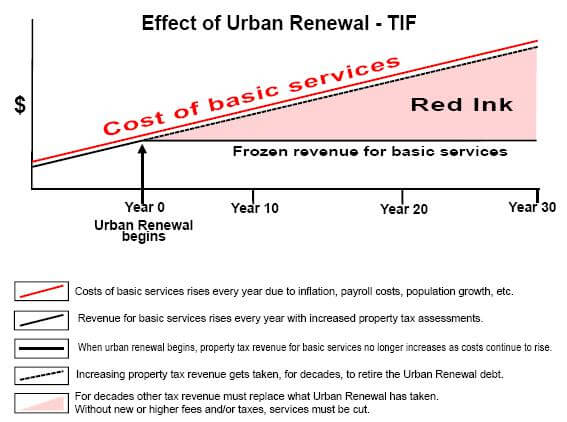 If it seems these things are the City’s or County’s jobs or the job of the actual business owner–you’re right. But, now see, that wouldn’t be as much fun as the government creating a new pot of money from which apparatchiks can give out political favors. In fact, they will with impunity plunder the money to increase the profile of their buddies’ government programs and not-for-profit organizations which will ALSO see some of the money.

How will they do THAT? Easy. Bring on the Community Organizers.

Getting the City and County this pot of money to use for their future desires requires some finessing of the local yokels. “Neighborhood buy-in is critical, ” lectures the website. That’s why the process starts with organizing a broad cross-section of grievance groups that will be, sorry to be indelicate, but… paid off.

“This money will be used for scholarships so small business owners can get business development and business management classes at the college to help them in terms of mentoring, support, and learning how to deal with contracts, expanding their business; whatever we need to do to be more successful.” Preston Pulliams, President, Portland Community College

Isn’t that nice? We’re taking entire swaths of the community off the tax rolls for years in order to give the community college “scholarships.” Who gets to run that money? Government!

And see, this will help minorities, so it MUST be a worthy plan, right?

“The stress that we feel in the community I think begins to be remediated with projects like this. You have my complete support.” Native American Youth and Family Center, Rey Espana

And businesses will be able to avoid taxes as long as they get the money from the new pot of money and hire 10% more people. Multnomah County and the City of Portland could have removed their onerous business tax, business license fees, systems development charges and many other hammers they use to beat on business. But then they wouldn’t be able to control you and give out money FROM SEVEN NEW POTS OF MONEY to their cronies, now would they?

“The Neighborhood Prosperity Initiative represents a new way of working a neighborhood economic development because of working collaboratively with public and not-for-profit partners, like the county and the community based organizations that are already serving the local business community.” Patrick Quinton, Executive Director of the PDC

Taking your tax money to gain control of several new pots of money to use for political cronies.  Now THAT’S what I call government work! Or maybe it’s the mob. I get them mixed up sometimes.