Last September Dave Lister, whom I consider to be one of the most thoughtful writers on local politics, had some kind things to say here on the Oregon Catalyst about Dan Saltzman, suggesting that we all support Saltzman were he to enter the race for Portland mayor, Saltzman being a much better deal than the present alternatives.  Alas this did not happen. Since that time Scott Fernandez has filled that void for us, but Dave’s logic was sound. I would like to place this line of reasoning on our senior US Senator Ron Wyden.

Until Portland’s political culture grows a free-market constituency of some significance, Republican voters are not going to have a voice in city politics beyond rallying behind centrist candidates; this has been fairly obvious for some time, but the Portland metro area so dwarfs the rest of our state’s population, that this fact remains true for US Senate races as well, a reality often forgotten. What better opportunity for Republicans has there been to win Wyden’s seat than with Jim Huffman in 2010?

Besides his own talents as an inspiring candidate, Huffman had two trends working for him: the Tea Party and the Working Families Party (WFP). Yet he only won 39% of the vote as both these trends floundered. At its peak, Oregon never did have much of a Tea Party, but the real independent variable in Oregon politics was and remains the WFP.

Expanding beyond its New York origins, the WFP is a new progressive political party largely created and financed by SEIU and ACORN. It is an attempt to create a disciplined third party that can attract the most committed activists while minimizing the collateral damage those third parties can inflict on single member district electoral structures where a vote for a separate but ideologically pure party becomes a vote for the other side. The WFP’s innovation is fusion voting, where they usually nominate the Democratic Party’s candidate as their own, unless they choose to punish a moderate.

That is what happened in 2010. The WFP ran Bruce Conk against Ron Wyden. This new player in Oregon politics created such an immediate stir they had to defend themselves in progressive circles by saying “hey we have to run at least one candidate in state wide races to keep our ballot access why not do it in this safe senate race?” Things got interesting when the WFP then began a serious campaign against Wyden among Portland area activists.

The degree to which the Oregon Democratic Party (ODP) circled the wagons over what was then and remains today a fairly unheard of third party was remarkable. Portland Jobs with Justice (JWJ), probably the premier progressive organization in this city, scheduled a large rally in Holiday Park that was to march to Ron Wyden’s nearby office to deliver petitions that protested his centrist voting record. When the ODP learned just how many signatures JWJ had collected an unprecedented amount of pressure was brought to bear on these activists to cease and desist. The tipping point came when the Oregon AFL-CIO and AFSCME weighed in, probably reminding JWJ of its financial dependence on institutional members’ contributions and office space. JWJ caved, the march was cancelled, protesting against Wyden became taboo, and Bruce Conk was black-balled from progressive events. Indeed his very name seems to have been thrown into the ODP establishment’s memory hole. Conk went on to win only 1% of the vote, but his fight has not been forgotten.

Last week, under pouring rain, JWJ held a rally in Holiday Park against Ron Wyden and marched on his office. Free of the pressures of an immediate election and with Occupy Portland wind in their sails, they are building a coalition of progressive activists against him that might prove too strong for the ODP leadership to restrain. 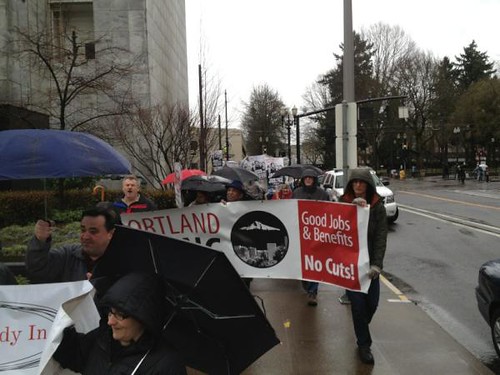 This presents the Oregon Republican Party (ORP) with a choice. In 2016 there may well be a viable WFP candidate with broad progressive support to take enough votes away from Ron Wyden that would make the election of a Republican Senator in this state possible. If they were to take that opportunity, it would be short-lived. That candidate having defeated a moderate Wyden, would simply be replaced six years later by another Jeff Merkley. A longer-term pay-off would come from the ORP actually supporting Wyden.

Wyden is no Republican, but the quality of his leadership on several key issues makes him too valuable a legislator to lose to what would otherwise be a more hard-left senator. One of Wyden’s first forays into politics in 1979 was to push for an Oregon ballot measure allowing non-dentists to sell dentures to seniors, a classic example of labor market deregulation. As an elected official, Wyden has been a consistent free-trader. He was the only Democrat in Oregon’s congressional delegation to vote for all three trade agreements last year. When representing Oregon’s 3rd Congressional District Wyden voted for NAFTA. Against the loud protest of the Oregon Sierra Club, he cosponsored the Silviculture Regulatory Consistency Act to deregulate the permitting process for building logging roads on state land. And long before SOPA became an infamous household name that all four Republican presidential candidates opposed, Wyden threatened to filibuster it, having already placed procedural road blocks at every turn.

On the prosaic matter of constituent work, Wyden has made his local office an effective engine for veterans affairs. When my WWII veteran grandfather passed away, our family had a minor bureaucratic issue to deal with. We called both Senator Wyden and Senator Smith. The Wyden office solved it before the Smith office returned our call to tell us “we’ll get right on that.” A few years back a Marine Corps buddy of mine, using the GI Bill to study at Portland State, qualified for a work study program but had a hard time finding a position. The job must deal with veterans affairs, most of them being security jobs at Veteran hospitals, all of which were taken. He heard that Senator Wyden’s office always employed as many veteran work-study students as possible to do veterans’ constituency work. My friend being a conservative Republican did not want to work for a Democrat so he applied to then Senator Smith’s office instead. He was surprised to learn that Smith was not interested in having any additional help even if the wages were paid for by the Department of Veterans Affairs. These are but two anecdotes of many that I have encountered that have demonstrated to me that while Wyden is no hawk when it comes to expanding American military intervention in world affairs, when it comes to looking after the needs of actual veterans long after their enlistment, there is no member of Oregon’s congressional delegation that supports our troops more.

The issue that has gotten the most attention and was the cause for protest last week, was Wyden’s partnership with Paul Ryan to reform Medicare health coverage with the same institutional design that has worked so well on Medicare Part D. It allows seniors the choice of opting for a defined subsidy for private medical coverage in lieu of enrolling in the traditional Medicare program. As with education policy, we are reminded that Democrats as a party are pro-choice on abortion only, but Wyden is no party hack. The empirical evidence for a premium support model is so overwhelming, that politics be damned this policy wonk senator of ours is supporting good policy over good politics.

Four years from now Wyden is likely to find himself with either a serious primary challenger or an unhindered WFP candidate. Like the Connecticut Republican Party supporting Joe Lieberman over their own candidate in 2006 when Ned Lamont won the Democratic primary, I think the ORP would be wise to start embracing Ron Wyden as their own. Over the next four years this would be a matter of tone and messaging, but in the 2016 primary, Republicans should themselves take advantage of Oregon’s new fusion voting law to nominate Wyden as their own candidate. Once Lieberman broke free of his reliance on the Democratic Party he has been able to move further to the right. At best, Ron Wyden would be free to do the same; at worst he will simply enjoy a long career as a centrist Oregon senator in the Wayne Morse and Mark Hatfield tradition.