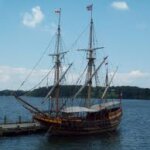 If you have visited Colonial Williamsburg or Jamestown, Virginia, but have never been to St. Mary’s County, Maryland, it is worth the beautiful drive to Colton’s Point on the Potomac River to retrace a lesser-known chapter in America’s founding. A Maryland Historical Society sign on the shore near the St. Clement’s Island Museum marks the landing of The Ark and The Dove on March 25, 1634, adding, “Here, on the same day, Father Andrew White, S.J. celebrated the first Catholic Mass in the British-American colonies.”

From Colton’s Point you can follow the peninsula southeast to Historic St. Mary’s City, not far from the mouth of the Potomac. A National Historic Landmark, the founding site and first capital of 17th century colonial Maryland has been excavated and recreated with a museum, interpretive exhibits, and reenactors in costume. Historic St. Mary’s City celebrates the bold experiment in freedom that was early colonial Maryland. Several colonies in New England were havens for religious minorities fleeing persecution in England, but Maryland was the first to free the faith of its citizens from government control by not establishing a state church for sixty years.* Catholics and Protestants founded the colony together.

The practice of Catholicism was illegal in England in the late 16th and 17th centuries. English Catholics were subject to ruinous fines, imprisonment, and in many cases death for holding to their faith as it was practiced before the reign of Elizabeth I. To be a Catholic priest was, in itself, considered a treasonable crime punishable by being hanged, drawn, and quartered. Facing the inability to practice their faith openly, some Catholics sought to emigrate and create a new life in North America.

The religious history of early Maryland was complex. Interreligious coexistence was difficult and largely without precedent in the colonies. Respecting each other’s rights to practice their faith openly, to serve in government, and to be free of coercive taxation for the benefit of an established church required constant vigilance.

The Toleration Act passed by the colonial assembly in 1649 guaranteed that no Christian should “be any ways troubled molested or discountenanced for…his or her religion, nor in the free exercise thereof…nor any way compelled to the belief or exercise of any other Religion against his or her consent.” A midcentury coup attempted to repeal the Toleration Act, but the principle of religious freedom survived until 1692, when the Church of England was established in Maryland as in the mother country.

Despite this setback, Maryland’s experience of six decades helped pave the way for Americans to recognize that freedom of religion was a right inherent in the people that should be protected from abridgement by law. When the First Amendment to the U.S. Constitution prohibited Congress from establishing a religion “or prohibiting the free exercise thereof,” the Founders prevented the kinds of political conflicts and abuses of conscience with which their ancestors had struggled for hundreds of years and upheld human dignity.

We do not have freedom in America today because it is―or ever was―simply convenient legally or culturally, but because Americans believed that persons are not subservient to the government. Rather, government is established to protect the rights and freedoms of the citizens. Government derives its powers solely from the people, each of whom possesses inherent personal dignity. The Founders restricted the federal government’s powers, not to protect government from the beliefs and values of the citizens, but―knowing history―to protect citizens from the tendency of government to expand its powers at the expense of personal freedom. Respect for the sacred space of the human heart is the guardian of liberty. The legacy of that Mass on St. Clement’s Island in March 1634 is that a small group of English colonists sought to respect that space, and one day a new country succeeded.

*The website of St. Mary’s County describes how unusual the founding of Maryland was:

“Religious toleration became the official policy of the Maryland colony, as did recognition of the Native Americans as a separate people with inherent rights. This was extraordinary for the time, as views in the other colonies and the mother country were sharply different. These two progressive pieces of 17th-century policy foreshadowed the provisions of the U.S. Constitution guaranteeing separation of church and state and subsequent laws enacted to protect civil rights.”

Kathryn Hickok is Publications Director at Cascade Policy Institute, Oregon’s free market public policy research organization. A lover of Catholic history, she has traveled extensively to sites of historical and cultural significance throughout the U.S., Canada, and Mexico. She is a graduate of the University of Portland and Kolbe Academy Home School.