This past Saturday night, I went with my good friend Allen Alley to my first Portland Timbers game..er.. match. It was not only my first Timber’s match but first soccer match period. Let me preface by saying: I HATE SOCCER. Now, for the 13 people that will be insulted by that statement let me say this: I HATE SOCCER. I believe it is ruining our youth and turning them away from the perfect sport, the sport of God…….BASEBALL and it is a Communist attempt to infiltrate America by brainwashing our youth….. (I digress, sorry) 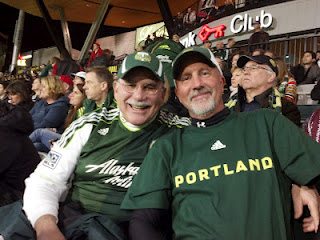 My friend wanted me to open my mind and see if maybe I was wrong. He would teach me the ins and outs of this game from a long time fan, player and coach’s perspective. By midway through the game..er.. match, I had a very good grasp and understood exactly what was going on. That is not the point of this article though. The point of this article is to illustrate the irony of the Portland Timbers game…er…match setting.

Irony number one: The stadium is named for Jeld Wen Windows and Doors. You can observe their signs and doors and logo and billboards all over the stadium and I love that. It’s capitalism at its best. That is irony number one though. If you were to take a poll of the fans at a Timbers game…er..match, I believe you would find that in my estimation, the vast majority are “left leaning” or at the least, very Democrat. Do they know that Jeld Wen is one of the MOST Conservative companies, politically, in Oregon?

Irony number two: The Timber’s Army and their mascot. These are soccer crazed fans who sit in one of the end zones, dressed in all of their team’s apparel and cheering and singing and generally behaving as good soccer fans behave, and that I have NO problem with. 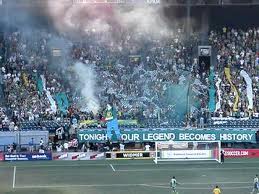 What is the irony then? One of the things they cheer the most for is a goal of course. A Timber’s goal scored means Timber Joey! 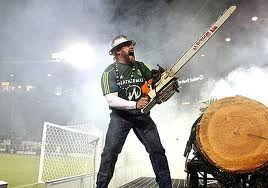 Timber Joey is the mascot, a long since obscure in Oregon logger. He has his cork boots, his cut short jeans, suspenders and the old steel helmet. He wields a huge chainsaw the he regularly revs up to get the Army excited. When a goal is scored, he cuts off a great big slab from a log. Cool huh? I thought it was. The irony is that, again just guessing here, the vast majority of the Army, being from Portland, a VERY anti-timber city, don’t get that Timber Joey represents what once was the major industry and creator of jobs in Oregon: Timber. Harvesting and replanting trees of which this state has an abundance of! Those very fans cheering Timber Joey with his chainsaw would NEVER think of allowing Joey to go out into the forests of Oregon and actually use that chainsaw for what it was meant for!

I have been told that the Timbers generously plant a tree for every goal scored (and every slab of that dead tree Joey cuts off). That is very nice. How about instead, the Timbers allow the timber industry of Oregon to harvest 100 acres of forest for every goal instead? That way, several thousand good folks from the rural parts of Oregon, who currently have no money to go to a soccer game…err..match because they have no jobs, no mills and their schools are shutting down, might be able to find jobs, open mills and continue a way of life that lasted for 150 years in Oregon. Yes, I realize I am crazy and yes I realize the Timbers have no say in whether timber harvesting happens or not in Oregon, but I sure do wish the children at the Timber’s game..er…match could be told the truth about that big old log and what it means to those of us who live outside of the comforts of Portland. 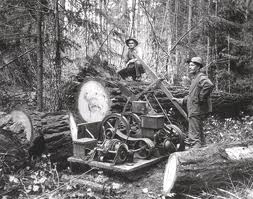 Catch The Bill Post Radio Show every day at noon on AM 1430 KYKN, listen live on the Internet or listen to replays at http://www.bpshow.com