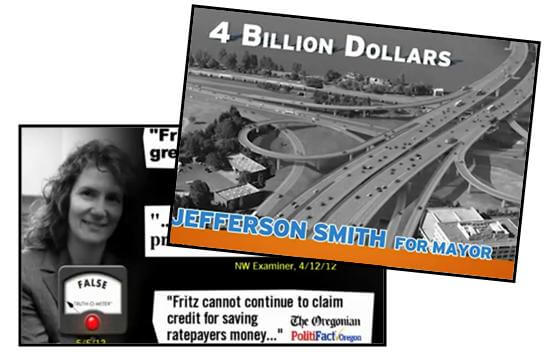 One of the biggest surprises of the Portland Mayor race was Jefferson Smith who received nearly 30% of the vote and beat out Eileen Brady who got 24% of the vote after spending over a million dollars (more than the other two candidates combined). . It was Jefferson Smith who ran television ads against wasting tax dollars on the Columbia River Crossing bridge and another ad touting his saving taxpayer dollars by cutting middle management waste from the state budget and another ad touting budget transparency & wasted ratepayer dollars. Every complaint against Brady (in the rumor circuit) from many different voices always included her support for the $60 million eco-boondoggle sustainability center that taxpayers and both Democrats and Republican leaders have disliked. Charlie Hales got the most votes at 38% but that is expected as a Former Portland Commissioner.

City Commissioner and incumbent Amanda Fritz got stuck in a tie with challenger Mary Nolan. Taking out an incumbent is difficult and Mary Nolan almost did it with her two TV ads, one attacking Fritz for “wasting money” and the other for Fritz wasting tax dollars on a 911 mismanagement problem.    Interestingly, many consider Nolan more liberal than Fritz and yet the campaign Nolan chose to run was one of taxpayer issues and budget management.

Nolan and Smith could have run on raising taxes or followed Obama by saying other Oregonians should pay more. They didn’t. Instead they made fiscal management a top campaign issue. If they win in November and actually live it out in office what they ran on they will find Portland a better city and bring taxpayers great relief.