A few months ago the Associated Press reported to us about a shift in thinking. In fact, we 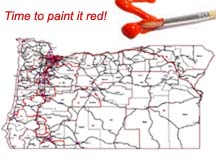 learned that it might not be the Oregon House people should be paying attention to this year. Instead, the fight for control of the legislature might be fought in the Oregon Senate.

The AP’s Julia Silverman wrote this:

PORTLAND “” The campaign year of 2006 was supposed to belong to the state House of Representatives.

After all, the House has it all: a great spotlight race in the Democrats’ fight to take down House Speaker Karen Minnis, R-Wood Village, plus up to a dozen other compelling contests that could either cement Republican control of the chamber or shift it to the insurgent Democrats.

But then, when not many people were paying attention, things suddenly got very interesting in the state Senate.

The article went on to say:

“It’s a pickup year for us,” said Rick Thomas, the executive director of the Leadership Fund, the GOP’s campaign committee. “We’re really in the situation that the House Democrats purport to be in, with only a few seats to defend and several pickup opportunities.”

Senate Republicans have an excellent crop of bright, articulate, and impressive challenges who provide the GOP the opportunity to considerably alter the climate in the state Senate. From North to South they have some amazing people running. I’ve had the opportunity to meet two of them personally … Carol York, a Hood River County Commissioner, Jim Torrey, the popular former Mayor of Eugene. First with Carol … in a word … energy. And I don’t mean that hooky holistic positive vibe crap … I mean the raw get out on the street and pound the pavement, pound on a few doors, always working sorta energy. She is the really deal when it comes to grassroots campaign. As for Jim Torrey. My word would be comfortable. From the moment you meet him, you can understand why sooooo many Democrats voted for him in Eugene … you seriously can’t help but to love him. While I haven’t had the pleasure of meeting Lynn Aiello, the community activist from southern Oregon, I heard great things about her and her race as an opportunity for Republicans to make changes in the Salem Senate.

This is what the AP’s Silverman wrote about Republican chances in a few of those districts:

“Hood River is the portion of that district that tends to vote more Democratic,” Thomas said. “It’s the rest that consistently votes Republican. So somebody that wins already in the Hood River area puts us in a good position.”

Also, if state Sen. Vicki Walker, D-Eugene, who has been weighing a gubernatorial run, opts out of the Senate race, the Democrats will have to find a new candidate to oppose her declared opponent, former Eugene Mayor Jim Torrey. Torrey is well-regarded for his ability to win votes as a Republican in the Democratic stronghold of Eugene, though Democrats charge that he’s never really been tested by a tough campaign.

Let me know if I am missing a race in your neck of the woods. Chime in with you’re favorite candidates and their chances to create a Republican majority in the State Senate.

Republicans must start now to build strong grassroots campaigns to counter the efforts of unions, environmentalists and other liberal special interests groups that will come out in force this fall. It takes time and it is critical we start today! We must make sure we are not outworked by the other side. Please look at the list of upcoming volunteer opportunities in your area and sign up for at least one.

So what are you doing to bring about the sea of change in the Oregon Senate? Here are a few opportunities our friends at The Leadership Fund have passed along to us where you can chip in this weekend:

Please come spend a few hours of time to help some great Republican candidates on Saturday, May 13th from 9:30 am — 1:30 pm.

As we gear up to knock on thousands of doors we need your help. Please call or e-mail today and sign up for a shift in your area. Victory in November requires your help now! GET OUT AND POUND THE PAVEMENT … YOU CAN REST DURING THE SUMMER!!!

e-mail:[email protected]
to RSVP or for more information