The state of Oregon has made a name for itself in transportation planning the world over. Progressives in other states only talk about boxing everyone within an artificial growth boundary with transit orientated development while embracing gridlock and potholes as a positive outcome to get people out of their cars. The Portland Metro area actually does it beyond any other region’s wildest imagination.

It is fitting then, that the most sought after expert on transportation planning lives in our state too. Randal O’Toole is probably the most well known national economist that resides in the Beaver State – not in Portland mind you. He lives in Camp Sherman near Sisters. He does not have to suffer under the city planners’ machinations to be the most influential transportation analyst. With a good internet connection and the solitude of central Oregon, he runs data sets and offers advice to countless municipalities and civic groups around the world.

O’Toole is also a prolific author.  His blog is probably the best source of insight on ground transportation policy, getting as many hits from those who disagree with him as those who share his skepticism of mass transit’s over-hyped benefits. His books get quoted in public hearings across the country. If you had read his 2007 book Best Laid Plans, perhaps you noticed his warning that city planners were contributing to a real estate bubble that he predicted was “threatening the world economy” and “would cause the world to go into a severe recession.” His latest book, American Nightmare: How Government Undermines the Dream of Homeownership follows up on his unique perspective of the way city planning contributed to the housing market collapse. O’Toole shows how the housing bubble and inevitable crash that followed resulted from a tension between federal policies aimed at increasing homeownership and state and local policies aimed at reducing it. 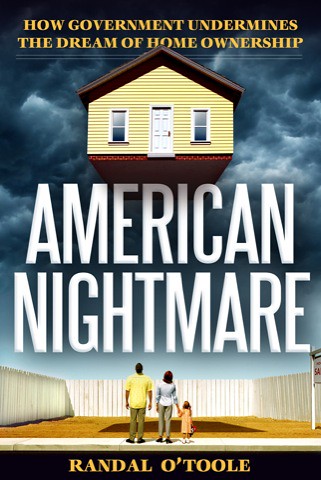 The first six chapters are a remarkably concise history of the six historical factors that have influenced homeownership in America: English common law, America’s agrarian origin, America’s rapid urbanization, the development of the suburbs, New Deal policy, and post war policy. O’Toole shows how quickly America moved from its old world origin where only the wealthiest members of society owned their own home to the broad home ownership we have today. Of the rest of society, he makes a distinction between what was once called the “working class,” those with little skill who worked with their hands, and the “middle class,” using the original meaning of that term, as the people who are highly educated and highly compensated, but not as wealthy as those few at the top. O’Toole shows the broadening of homeownership has largely been driven by the desire of the middle class to both keep its social distance from the working class as well as dictate the housing options for an elite perception of the working classes’ own good.

Urban middle class families preferred renting until noisy immigrants with their smelly foods and backyard livestock began buying up land all around them. To keep the Irish, Italians, freed slaves, and Jews at bay, the middle class first sought homeownership in covenant protected communities, then zoning laws, and finally the suburbs. The postwar economic expansion afforded the working classes the ability to follow the middle class into the suburbs, and it did not take long for old WASP snobbery to evolve into an environmentalist ideology to fight suburban development for a thinly veiled multitude of reasons.

The middle class developed another tool to remove unwanted people from prime real estate: urban renewal. Starting in 1949, urban renewal was such a blatant tool to displace black communities, the civil rights movement all but eliminated it. California became the first state to develop a local financing method called Tax Incremental Financing (TIF). This has been a powerful tool for local patronage politics. At first planners had to prove the existence of blight, but Justice Stevens’ opinion in Kelo v. New London has eliminated this necessity, allowing government planners to rely on internal studies that suggest the property value can merely be improved upon as the new low legal hurdle that local politicians can now easily grace over.

O’Toole goes into such detail to explain the development and use of TIF, that chapter 10 alone is worth buying the book. Coming from Oregon, O’Toole uses many anecdotes from our own state, including the way TIF has been used to further subsidize transit orientated development, when the construction of light rail had the opposite effect Metro planners predicted:

When Portland, Oregon opened its first light-rail line in 1986, the city zoned much of the land near light-rail stations for high-density development. Ten years later, city planners sadly reported to the Portland City Council that “we have not seen any of the kind of development—of a mid-rise, higher-density, mixed-use, mixed-income type—that we would’ve liked to have seen” along the light-rail line. City Commissioner Charles Hales noted, “We are in the hottest real estate market in the country,” yet city planning maps revealed that “most of those sites [along the light-rail line] are still vacant.” To correct this situation, Hales persuaded the city council to use TIF and other subsidies to encourage developers to build transit-oriented developments. Today, Portland routinely creates urban-renewal districts along all its light-rail and streetcar lines so it can use TIF funds to promote so-called transit-oriented developments along the lines. Portland planners often claim that these developments were stimulated by the opening of new light-rail and streetcar lines. In reality, all the rail lines did was create an excuse for the city to use TIF to subsidize the developments. Portland’s famous Pearl District alone received more than $170 million in subsidies, mostly financed by TIF.

O’Toole points out that California is now trying to eliminate these renewal districts to shore up its budget shortfall; perhaps the rest of the country will follow.

O’Toole’s identification of the role that land use planning played in the formation of the recent housing bubble is the most provocative and insightful part of the book. First he reminds us that there were several local housing markets that had all the same financial instruments to inflate housing prices that California, Florida, Nevada, and Rhode Island did without participating in the asset class inflation. These more stable markets had little land use planning while the most inflated markets had the most. O’Toole reminds us of Charles Kindleberger’s classic work on financial bubbles, pointing out that the first stage involves some kind of a microeconomic shock to the asset class in question before it forms a bubble. In our past bubble economy, our growth management planning provided that shock.

O’Toole concludes with an itemized list of policy recommendations to avoid future housing bubbles. This highly detailed book is a must read. The kindle version is only $9.39 and I highly recommend it.

He will be presenting his book at the next Executive Club around 7pm at the Airport Shiloh Inn next Wednesday June 6th. If you have never been to an Executive Club meeting before, this will probably be the perfect introduction. If you can get there earlier, the hotel offers a delicious buffet for a fun hour of dinner table conversation followed by the Taxpayer Association of Oregon providing a forum for various local free-market groups to make announcements. You will usually find me each month sitting next to Steve Buckstein at the Cascade table.