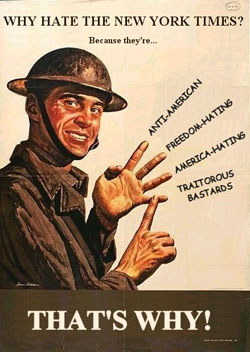 “These people are our food, not our allies.”

This quote by the vampire leader played by Stephen Dorff sums up the way I believe the press should feel about politicians. ALL POLITICIANS. Unfortunately, the press has chosen sides — they’re on a Republican only diet.

Conservative pundits and many Hillary Clinton supporters have labeled 2008 as “The year journalism died,” meaning that reporting is not merely biased, but that even the pretense of objectivity has disappeared from the “mainstream media”. Welcome to the club Hillary supporters.

Like most conservatives I had long been distrustful of most traditional media, but, aside from the occasional story that did not portray my candidate or beliefs in a way that I felt was fair, there was no single event so obvious that I could point at and say “look!”

It was during the 2004 presidential election that I realized that the accusation that the “mainstream media” really was incredibly biased in favor of Democrat candidates was irrefutably true.

For months the alphabet networks and the nation’s newspapers ignored the Swift Boat Veterans for Truth. 16 of the 19 officers in John Kerry’s chain of command went on record saying he was unfit to be commander in chief, the story was ignored for months, and when it finally could no longer be ignored it was always sandwiched between stories of Kerry’s medals.

Does anyone think for one second that if 75% of the officers who served directly with George W. Bush in the Texas Air National Guard went on record saying he was unfit to be commander in chief it would not have been THE story for the entire election?

Dan Rather was so desperate for a story that former Texas Army National Guard officer Lt. Col. Bill Burkett, well known in Texas political circles for being less than mentally stable and with a history of making false claims against Bush, conned Rather with forged documents purported to have been typed on a typewriter over thirty years ago, yet so obviously produced in Microsoft Word that their falsity was immediately apparent to everyone except the most delusional left wingers.

Do you think Rather would have been so enthusiastic, desperate and careless if the documents had come from a nut with a grudge against John Kerry?

Fast forward to 2008 and the most unreported, misreported issue of this election, Barak Obama’s relationship with terrorist bomber and multiple murderer Bill Ayers.

Seven people were killed, and several others maimed for life in Bill Ayers weather underground bombings.

Ayers and his wife Bernardine Dohrn, another Weather Underground member and also former member of the FBI’s ten most wanted list, are unrepentant. They wish they “could have done more.” I want to point out again that Ayers and Dohrn were not just hangers on, they were the leaders of the Weather Underground, directly responsible for bombings, jailbreaks, riots, robberies and murders.

Obama and Ayers — The Timeline.

From 1995 to 2001 Obama served as director of the Chicago Annenberg Challenge, an education related non-profit founded by Ayers to distribute money to radical education programs. Ayers hand-picked Obama for the chairmanship.

In 1995 Barak Obama’s political career was launched in an intimate gathering of a dozen people at terrorists William Ayers and Bernardine Dohrn’s house.

In November 1997, Ayers and Obama participated in a panel at the University of Chicago entitled “Should a child ever be called a “super predator?” to debate “the merits of the juvenile justice system”. The forum, including panel selection, was set up by Michelle Obama in her capacity as Associate Dean of Student Services and Director of the University of Chicago Community Service Center.

In April 2002, Ayers, Dohrn, and Obama participated together at a conference entitled “Intellectuals: Who Needs Them?” sponsored by The Center for Public Intellectuals and the University of Illinois-Chicago. Ayers and Obama were two of the six members of the “Intellectuals in Times of Crisis” panel. This forum was set up by Michelle Obama in her capacity as University of Chicago PR executive.

In February of 2005 Obama, Ayers and Dorn were among the attendees at a farewell dinner for Arab American Action Network founder Rashid Khalidi, longtime supporter of Palestinian “˜resistance’ attacks against Israel. Obama, Ayers and Dorn’s testimonials were among those in a commemorative book filled with testimonials from Khalidi’s friends and political allies. In 2000-2001 Khalidi’s group received $70,000 from Obama and Ayers Woods Fund.

Barak Obama and William Ayers are NOT the casual acquaintances Obama claims. It is obvious not only that they are long-time allies, but that Ayers was Obama’s mentor.

Why does this matter?

It’s simple, our associations reveal who we really are. Our peer groups are people like us. We hang out with people we like and admire, whose company we enjoy. We choose or accept as mentors people whose behaviors we emulate.

Let me personalize it. Someone I had known for ten years and worked on several political projects with was arrested for a heinous crime a while back. After reading the police report it became my opinion that he was guilty as sin. I will never associate with this individual in any way ever again, not for political reasons, or to “cover my ass,” but because I am fundamentally repelled by what I believe to be his actions. My association with him would be a tacit acceptance of what I believe to be his actions, just as Obama’s association with Ayers and Dohrn reflects an acceptance of their actions and it would not matter if he committed this crime forty days or forty years ago.

Let me ask just one simple question: What if John McCain or Sarah Palin had similar connections to an unrepentant abortion clinic bomber responsible for over 25 bombings, numerous riots robberies and jailbreaks and seven murders? Do you think the dim-witted Anderson Cooper would be dismissing him as “some guy who wants to help kids?”