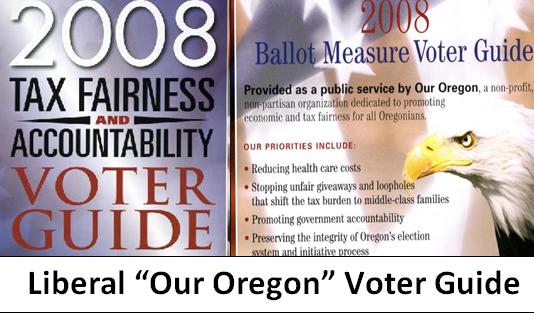 The past ten days says everything on how liberals are converting to popular anti-tax philosophy just long enough to get elected and then they can raise all the taxes they want. Jeff Merkley introduced his most publicized campaign proposal this week, which is to give taxpayers a $500 tax cut. Merkley even emphasized that he wants it as soon as possible. This comes off of Merkley’s ads touting in bold highlights that he is going to cut taxes while simultaneously attacking Gordon Smith in debates and in press releases for raising taxes. Gordon has a great pro-taxpayer record compared to Merkley where we are unable to find a single tax he didn’t vote for in his near entire 10 year term.

The liberal/union coalition group, Our Oregon, mailed out a voter’s guide called “Tax Fairness and Accountability” draped in imagery of the bald eagle and U.S. Flags. The guide warns taxpayers against “higher fees” and higher “tax burdens” and then offers liberal YES/NO endorsement list that will in effect prevent tax cuts and create more taxes.

Also this week, Barack Obama produced his 30 minute TV infomercial. Obama delivered his prime point saying, “As president here is what I will do, I will cut taxes for every working family making under $250,000 a year. Give business a tax credit”¦”. Obama didn’t make his first priority “helping the kids” or a strong foreign policy, but rather cutting taxes (twice).

This is the same Obama who earlier proposed raising capital gains taxes to 28%, then decided to scale back his increase by nearly half, and then told reporters he was going to delay it altogether until better economic circumstances. Obama used McCain’s health care tax reform as a way to place TV ads attacking McCain for raising taxes (while ignoring the counter tax savings).

If Merkley, Obama and Our Oregon have their say they will obviously do what they have done before which is to raise taxes as much and as often as there is political will to do it. Tax and spend politicians are limited only by their imagination.