A section of a 1972 amendment to an education bill has become so famous as a powerful force of gender related affirmative action it simply gets referred to by its index notation: Title IX. Forty years after it first went into implementation, it has almost entirely become associated with athletics, a fact reinforced by the catchy brand name of a line of women’s athletic wear Title 9. 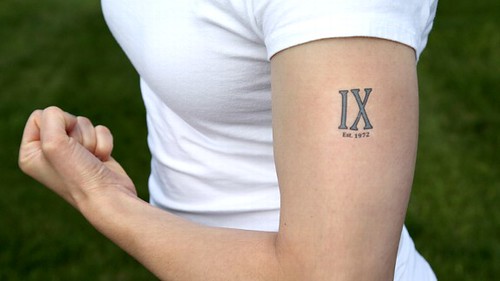 When the law was passed, women’s athletics was not even a concern. Intending to integrate higher education, Title IX was not written in a Brown vs. Board of Education way mandating it. Rather it imposes a Plessy vs. Ferguson “separate but equal” structure, requiring the demonstration of full equality in budgeting to federal regulators. In 1972 many of the best universities’ undergraduate studies were for men only. Harvard College, for example, was all male, but its university also had Radcliff College for women. The passage of Title IX made this state of affairs extremely difficult to manage.

Since nature’s God has endowed women with an equal intellect as men, the easiest way to fully comply with Title IX was to integrate the genders together in higher education. Five years after it went into effect, Harvard University merged Radcliff into its full undergraduate program. These new female students were called “co-eds” – an anachronistic term surviving today only on the pages of Playboy Magazine.

This integration has been a great success, because it has coincided with a cultural change in the broad acceptance of opening the professional world to women. In doing so, we have essentially doubled our labor force in a generation. In What Went Wrong, Bernard Lewis lucidly laid out the cultural burdens holding the Islamic civilization down as the West surpassed it. Foremost on his list was its failure to harness the talent and creativity of half its population. This remains a structural barrier to economic growth in Africa and Latin America as well.

College athletic budgets however remain the most highly contested, scrutinized, regulated, and litigated area of every major university’s operations. An equal number of dollars must be spent on women’s athletics regardless of the demand for participation. This also has placed ceilings on men’s sports regardless of how far demand exceeds supply.

If gender equality truly was our goal, the obvious solution to this problem is to pursue true equality by integrating college athletics too. We should not have separate but equal basketball teams. There should be one team that is fully integrated and let the best players compete to play on it. If there are few women represented on that team, is that any worse than there being few white boys who can’t jump either? Since I myself am a white boy that can’t jump, I assure you I do not feel discriminated against for not having had my own separate league with equal funding to play in.

Title IX’s relevance today is limited to areas where there are real differences in both ability and interest between men and women, because the areas of natural integration have already been integrated. True diversity should respect rational choices made by individual men and women according to their different interests and abilities, but Title IX and its quota mentality is trying to push us beyond equality of opportunity into a dogmatic pursuit of mathematical parity.

Forty years later, Title IX’s quota mentality can be seen in many quixotic manifestations. At the same time there is pressure to integrate women into infantry units in the military, in the name of “equality” policy makers demand lower physical standards to be applied to women so they are not put at a career disadvantage. We are also beginning to see the Title IX-ing of the science, technology, engineering, and math (STEM) fields in the academy. Responding to this pressure, then Harvard President Larry Summers publicly declared a fact regarding STEM interest and ability as measured by data:  “There is relatively clear evidence that whatever the difference in means—which can be debated—there is a difference in the standard deviation and variability of a male and female population,” and before you knew it he was fired for such an accidental utterance of the truth. And last week Julie Parish seemed to argue she was entitled to a quota to be in the Republican House leadership.

Title IX’s quota culture is all around us. Given the remarkable advantages we have gained by integrating women’s talents into full contribution to our society, perhaps we need to ask if 40 years later, Title IX’s separate but equal formula has become a threat to individual liberty rather than a tool for its advancement.