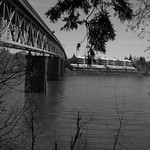 For more than six years, Multnomah County has been considering how best to replace the Sellwood Bridge. The plan that has been adopted calls for removing the current bridge and replacing it with a new one that is twice as wide.

However, none of the new space will be available for cars, even though cars carry nearly 98% of all passenger trips during the peak hours. Only about 40% of the new bridge will be allocated to vehicular travel, with the other 60% dedicated to non-motorized transportation in the form of bikeways and mega-sidewalks. Heavy trucks will be banned entirely from the bridge, increasing congestion on nearby streets and raising transportation costs for businesses.

The new bridge does need more space for cyclists and pedestrians because the current bridge was never designed for them. However, there is no reason to allocate 60% of bridge space to satisfy two percent of all travelers.

County Commissioners were recently shocked to discover that the price tag for the bridge has gone up by $70 million since last year. If city planners want to save money, they should reduce the width of the bridge. Planning for two 12-foot sidewalks to accommodate a few hundred pedestrians is simply a waste of resources.