Unemployment had taken much more from me than a living. It was robbing me of my soul, a downward slide I was ill prepared for.

As the nation races towards Election Day on November 6, we need to pause and reflect on what this election means to the millions of unemployed, part time needing to be full time workers, and those who have simply given up the hope of ever finding a job. This vote will determine the future of our great land, and while there are many critical issues at hand, the jobs crisis, by all accounts, is first and foremost in the minds of the American people.

There are thousands of stories across the country of how this administration has failed a country that wants and needs to work hard to provide for their families. Hard work and sacrifice built this country into the most respected economy in the world, but we are now in danger of losing the very freedoms that those across the world flock to America to experience. Yes, there are many stories. This is mine.

I built and ran a successful furniture and cabinet refinishing business in Southern California for 28 years. As the economy once again turned downward in early 2008, and with the news that our 6-month old granddaughter was about to undergo open heart surgery, my wife and I made the decision to relocate to Portland, Oregon, where my daughter’s family resides. I shut the doors to my business, as did my wife Kathy with her accounting practice, and we arrived in Portland on August 1, 2008. I no longer needed to make the money I did in California, and I figured I had a little time to pick a new career. My wife and I were 54 years old. We had some money in the bank from the sale of our house, and a little bit in an IRA account.

Beginning in January, 2009, I began to look for work in earnest.  I applied at Home Depot, Costco, Best Buy, Lowe’s, et.al. After many applications and zero interviews, I accepted a job as a bus driver and substitute teacher at a day care center. At $10.00/hour, I didn’t make much, but it was at least a modest contribution to our family finances. After 3 months, I had to leave after discovering the husband and wife owners were absolute tyrants, as well as more than willing to bypass Oregon employment regulations. I realized at this point I would have to search for a job in my previous profession in the refinishing industry. My body said no, but my finances said yes, and I found a job as a cabinet refinisher. After 4 months of a spotty workload, I was laid off when the work completely dried up. At this point in time, I had worked for 7 months in the first 2 years of my tenure in Oregon. Time stretched on, and a mild depression started to settle in.  Little did I know how much worse it would get.

Depression is a subtle thing sometimes. It sneaks up on you in your dreams at night, and soon overtakes you in your waking hours. I had become a person I didn’t recognize, much less one I respected. I was filled with remorse as I watched my wife head off to work each morning, knowing I was not contributing a penny towards our escalating bills.

Unemployment had taken much more from me than a living. It was robbing me of my soul, a downward slide I was ill prepared for. I started to apply at fast food joints. I answered a help wanted ad on Craigslist at a favorite local burger house. I sat in the parking lot for a good 10 minutes, and I surprised myself when I shed a tear. A dark realization had just overcome me. My first job as a teen was at Jack-In-The-Box. I had now, at the age of 57, come full circle, right back where I started. I pulled myself together, entered, and was told, “Sorry, man, we’re not looking for anybody”!

I continued to apply for different minimum wage jobs. Nothing. Not one call. I was on the edge, for sure.

Anger, depression, growing despair. A toxic mix which is shared daily by thousands across the country. Our house was on the line, in a way. We are not underwater, but if we were forced to sell, we would stand to lose about 50% of our equity. My faith in God had been affected by this ordeal, and I shook my fist at Him more than once. I was slipping away. Since our arrival in Oregon, I have been laid off from two jobs before I even started. On another occasion, I went to a second interview at 3:00 PM that had been scheduled at 10:00AM that morning. When I arrived, they stated that they had filled the position at noon.

I was getting desperate. That money in the bank? Gone. That modest IRA? Gone. I had to do something. With my wife’s encouragement, I did.

Moping around the house, listless and unmotivated, was not the man I wanted to be, but I seemed unable to shake myself free. I decided to get out of the house, and volunteer somewhere, anywhere. My sanity depended on it. Not getting paid for work is decidedly better than not working at all.

Hillsboro Main Library was the recipient of that decision. I volunteered at the library for 13 months. I loved the work, I loved the people, and more importantly, I was starting once again to love and respect myself! This led to a 6 month contract job on behalf of the Washington County Cooperative Library. My spirits were picking up daily. I had not had a paying job for 18 months, and it restored my spirit immensely! I started in January 2012, and the job was completed by the end of June. Even though I was once again unemployed, I was not in the same dark place I was in the year previous. Then God did an amazing thing.

I am a conservative by nature, a conservative now by party. I wasn’t always. I voted Democratic up to the 2000 election. True, my coming to Christ had something to do with that. One of the miracles of our great Lord is His ability to transform hearts, and he definitely transformed mine. On some issues overnight, on others more gradually. You cannot transform your heart immediately, no matter how hard you try. But He can. I came to realize that my belief system for 45 years was in line with the great deceiver. I mention this to give credit where credit is due. Jesus called me out of the darkness in the late 1990’s, for a purpose I am still trying to understand. I have to, I mean HAVE TO, believe that one of those purposes is to help bring our country back to the God who our country was founded on, believed in, and was immensely blessed by. At this point in my life, there is no higher purpose.

Although I believe in God, his blessings on our country, and my place in this, it is not my nature to be demonstrative in the public arena. I’m not sure why. When my wife was called to volunteer a shift at the Republican booth at the Washington County Fair this past July, I turned to her as she was on the phone and said “tell her I’ll come with you”. I immediately looked away and thought to myself, ”where did THAT come from”? The Holy Spirit is full of surprises! Kathy and I tended the booth at the fair, and before long I was thinking about a way that I could make a direct contribution towards our effort to educate people about their choice come November. (Again, completely out of character).

With the help of a stellar volunteer and all around great gal, we came up with this. 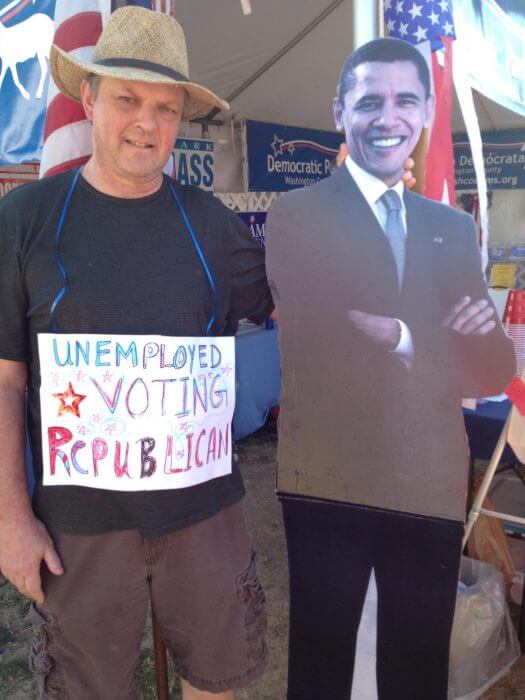 Doug with the guy he’s NOT voting for! 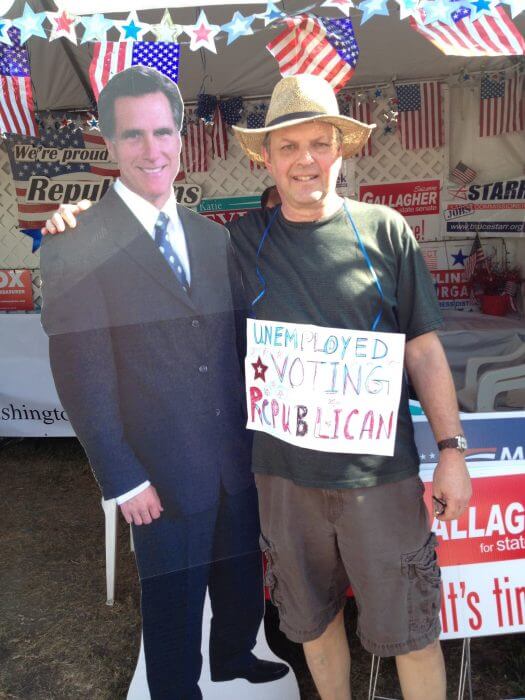 Doug with the guy he IS voting for!

I walked around the fair wearing this sign, and to my delight had eight positive comments to only two negative! Due to the decision to carry the Republican banner, I was recommended towards a possible job. I applied, was accepted, and I am now gainfully employed.

God has reminded me that a little fist shaking, a little wrestling, is quite alright. I can’t help but see Him smiling down at me and saying “I always had your back. But I appreciate the fact that it is hard to see sometimes”.

Every story has another story begging to be told. This is mine, and I would just like to offer a few words of encouragement to those who have found themselves inside this narrative. I believe in Jesus Christ, but if you don’t, that’s OK. Find a way outside of your immediate existence. Go to a meeting of like minded people, volunteer at your local food bank, library, or homeless shelter. Be a mentor to troubled children.  Whatever your heart is drawn to, follow it. You will meet people, and that is always a plus. My pride took a direct hit when I realized that I could not get a job without some help. Accept that help. God loves humility, and whether you believe in Him or not, He certainly loves you!