The Oregon Legislature in now in session, and as an Oregon Legislator since 2003 I have been researching, writing and emailing legislative updates to thousands of Oregonians across the state as a public service. I believe an informed electorate is the hope for a free people. These legislative updates are intended to inform you and other Oregonians across the state about key issues confronting our Legislature and how they can impact each of our lives. Today’s update focuses on the financial and economic situation facing the 2009 Oregon Legislative Session.

Each Legislative session, thousands of new laws are considered and hundreds are passed into law, but the primary purpose of this and every Legislative Session is to pass a balanced budget. In the 2007 session, the Legislature had generous revenue forecasts when creating the current 2007-09 Biennial Budget. The question for the 2007 Legislative Session was, “What good can we do with an extra $2.5 Billion of forecasted revenue?” The Legislature’s answer was to increase State spending by an astounding 22% in a single two-year period. Now the economic tables have turned; the euphoria is gone, and the state cannot even meet its budgeted obligations for the current biennium. The first loss will be the failure to fully fund Oregon’s Rainy Day Fund. In 2007 the Legislature created the Oregon Rainy Day Fund. In addition to a one-time payment from the corporate kicker, the Legislature promised to deposit 1% of the General Funds/Lottery Funds (GF/LF) budget into the Rainy Day Fund. It was to be a savings program to set aside revenues during boom times that would lessen the cuts required during times of recession. Due to the current economic downturn, the $140 million payment the Legislature promised to deposit into the Rainy Day Fund will not be made. In fact, State revenues have decreased to a point that, in addition to $140 million Rainy Day Fund payment, another $139 million must be cut from the current budget just to make it through the June 30, 2009 fiscal year-end. In short, Oregon’s economy is falling fast; its unemployment rate is climbing, and the prognosis for a recovery in 2009 is not good.

Notwithstanding the deepening recession, Oregon revenues for the 2009-11 biennium were still expected in December 2008 Forecast to increase by 5% over the current biennium. Even with such an increase, the cost to maintain our State government’s “current service level” (CSL) results in a shortfall of $1.4 billion. In other words, Oregonians have good news and bad news. The good news is for 2009-11, Oregon presently anticipates $15.852 Billion to spend in the next biennium””according to the December revenue forecast. The bad news is it will cost more than $17.2 Billion to pay for Oregon State government’s current service level. Thus, even with a revenue increase of 5% (which is likely to evaporate in the next forecast), Oregon will still need at least $1.4 billion of additional revenue in order to maintain its current level of government programs and services. In reality, such an amount will simply be too large a bite for Oregon taxpayers to swallow.

The Oregon Constitution does not permit deficit spending, so Oregon State, like every family budget, has only three options during such times of recession: increase revenues, cut spending, or a combination of both.

The Governor in the Governor’s Recommended Budget (GRB), has opted for the first alternative, and proposes to increase revenue in the following ways:

Before the Governor and Legislature consider raising revenue by increasing taxes and fees on its citizens and businesses (and increasing Oregon’s long-term debt), it first would be prudent to review how Oregon’s current revenues are being spent. The fundamental question is:

Does Oregon have too little revenue or too much government?

The size and cost of Oregon State government is growing exponentially and such growth is unsustainable. 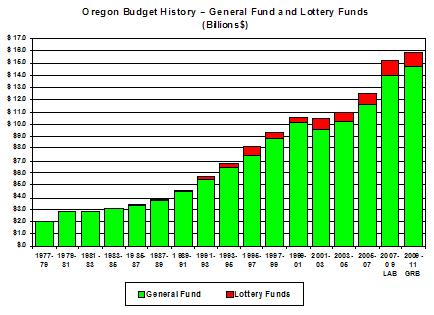 From the above graph we see the total General Funds/Lottery Funds (GF/LF) cost of Oregon State government has grown 27.5% in only four years. The 2005-07 budget was $12.272 Billion and the Governor’s Recommended Budget (GRB) for 2009-11 budget is $15.848 Billion. It may be different with you, but none of my friends, neighbors, and associates have increased their incomes by 27.5% since 2005. In my opinion, since the State has failed to set aside sufficient contingency funds during good times, and it must rely on money it receives from its citizens, it is unreasonable to expect the State can continue such growth, when its citizens are in financial crisis and must make drastic cuts on their own spending. So what is to be done?

The CHALLENGE for the Legislature is to do the following before increasing Oregon taxpayers’ financial burden with increased State debt, increased business taxes, increased vehicle title fees, and the many other proposed increases in taxes, fines and fees:

First, Articulate the Core Principles and Priorities for Oregon State Government. Oregon is in a global period of economic crisis, and with every crisis comes opportunities. In 2005, the Legislative Ways & Means committees were in a similar situation with inadequate revenues to cover the escalating costs of State government. We Legislators on Ways & Means spent months taking testimony, reviewing recommendations, and finally determining Oregon’s spending priorities. The plan was to determine and approve payment for top priorities first, and then approve funding the next highest priority items, and so forth down the list until the money ran out. Theoretically, it made sense to spend limited revenues on the State’s highest priority programs. Everything went fine until the prioritized funding list was made public. Advocates for every program that saw its name below the funding cut-off line on the prioritized list immediately mobilized their constituency. The Capitol was invaded by program advocates; telephones began ringing off the hook, and pleas for funding of all existing programs flooded every Legislator’s email system. The Legislature caved in, all programs got their piece of the budget pie, and the concept of prioritized spending was tossed out the window. By the end of the session, it was government-as-usual, and Oregon was left with a State government continuing to grow at an unsustainable rate. Now, four years later, the GF/LF expenses have increased by 27.5%, and we are no better off now than we were before. As much as legislators like doing good with other people’s money, it is time to open our eyes, look to the future and recognize the fact that we must curtail the expansion of such unsustainable government spending.

It is time to again prioritize spending, and this time direct full and adequate revenues only to high-priority, successful state and community programs that accomplish the following core principles of government:

1. Provide for public safety””define it and do it, without apologies to other programs. Protecting the people is the first responsibility of good government.

3. Provide a business-friendly environment””Oregon citizens and businesses are the customers of government agencies, programs and regulations, and such customers deserve fast, efficient, economical, and courteous treatment.

4. Provide a world-class, 21st century education for our children””quality of education is determined not merely by the amount of money spent, but also by the measured performance of students and the satisfaction of parents and teachers. In addition, the quality of Oregon education is a key component for attracting businesses to our state.

5. Provide health and human services only for those who cannot provide for themselves, and promote self-sufficiency, personal responsibility, and community-based assistance for all others in need. (Community-based models for providing for the poor and needy must be developed. The breath-taking escalation in government costs for health and human services cannot be sustained””either by the state or nationally. Better utilization of community assets will be key to future service delivery models. The time to develop them is now, not when a service-delivery crisis occurs.)

Second, Consolidate Programs and Improve Government Efficiency. Oregon has hundreds of departments, programs, and services. Many have existed for decades, and each has its own administrative costs and overhead. The combined growth of these departments, programs and services contribute substantially to the escalating costs of Oregon State government. Before passing each of the proposed budgets, the answer to the following question should be carefully considered:

“If this department, program or service did not exist today, would we create it?”

If the answer is NO, the Legislature should move all crucial functions of the obsolete or duplicative program elsewhere, then refuse to fund it. The Legislature is the “people’s purchasing agent.” Every program “purchased” with taxpayer dollars should clearly justify the expenditure. Money spent on programs that have outlived their usefulness is wasted. This concept of “government self-evaluation” comes from Peter Drucker and other knowledgeable management consultants, who understand survival in today’s economic environment. Successful organizations should re-evaluate their missions, their utilization of assets and personnel, their organizational structure, and their performance measures every five years. It is high time for Oregon to do the same. The Oregon Department of Human Services has been undergoing such self-evaluation, and is working to accomplish its self-stated goal of becoming a “world class organization.” I salute Director Bruce Goldberg for his vision, and hope that it will become the vision of every manager and case worker throughout DHS.

Finally, When in a Financial Hole, Stop Digging. In recent months, the Trillions of dollars borrowed by the federal government to “bail-out” businesses with flawed business models and leadership, and to provide “stimulus packages” to lubricate the national economy has been shocking. At last count, nearly $29,000 of additional federal debt has been incurred for every man, woman and child in America. This has been done without discussion of what the consequences will be to the value of the dollar, the credit worthiness of our country, or how these trillions of dollars of debt will be repaid. Now, Oregon is contemplating going down that same path. Oregon currently has $9.7 Billion of long-term debt and presently pays from GF/LF funds $220 million in debt service payments. Soon the Legislature will be asked to increase Oregon’s long-term debt with a State stimulus package. Oregon’s long-term debt with the proposed State stimulus package will increase the cost of debt payments from $220 to $330 million. Before Oregon burdens its citizens with such huge amounts of additional debt, the cost/benefit analysis should be carefully considered.

In conclusion, for more than a decade most Oregonians (and Americans) have violated sound financial principles that require producing wealth and saving a portion of it, before spending “disposable income” on things we want. Emerson was right, “Things are in the saddle and ride mankind,” and we are being ridden by the heavy burden of the debt used to buy our things. We have been maintaining a higher standard of living than we could afford, and paying for it with debt from credit cards, home refinancing, and home-equity lines of credit. Now, for a number of reasons, the credit-debt music has stopped and we are left without a chair to sit on. Ultimately, we must reboot the system and start again. The path to economic stability is likely to be long and painful, but it makes little sense to prolong the inevitable by putting Oregon deeper and deeper into debt. The marketplace will correct itself, if we will allow it to do so. Buyers will decide which products and businesses will survive. Unemployed Oregonians will find new businesses to start, new products and services to provide, and new jobs will be created. Rather than government trying to spend our way out of this recession, it would help best by lessening regulations, red tape, burdensome taxation, and fees. Neither the Federal nor the State government can spend its way out of this recession. It will only delay the inevitable economic consequences of poor financial decisions, and with that delay, exacerbate the adjustment when it comes. Rather than sink the ship of state with additional debt and taxes, we should find ways to let it right itself in this financial storm with time-tested, market-driven economic principles that made our state and nation strong, before the heavy-handed and expensive fist of government came to our aid in the 1930’s, the 1960’s, and today.