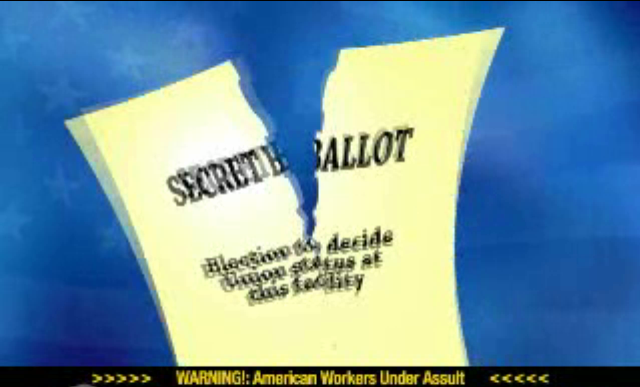 As the battle over the Employee Free Choice Act (Card Check) heats up, renowned legal scholar Richard Epstein weighs in with a new book-length study debunking the claims made by its supporters. Learn about the risks to job creation, small businesses and overall economic growth here in Oregon and around the nation in:

The Case Against the Employee Free Choice Act

Here is the media release about the study:

Washington, D.C. — Noted legal scholar Richard Epstein thoroughly debunks claims made by supporters of the Employee Free Choice Act (EFCA) in a study released today by the Alliance to Save Main Street Jobs. Scheduled for publication by the Hoover Institution of Stanford University, the study enumerates the countless risks to job creation, small businesses and overall economic growth that would result from this misguided legislation.

Epstein summarizes the economic impact by suggesting that “The bottom line therefore is that the passage of EFCA will create huge dislocations in established ways of doing business that will in turn lead to large losses in productivity.”

Identified by Legal Affairs Magazine in 2005 as one of the top 20 legal thinkers in the nation, Professor Epstein is the James Parker Hall Distinguished Service Professor at the University of Chicago, the Peter and Kirsten Bedford Senior Fellow at the Hoover Institution, and a visiting professor of law at New York University School of Law.

Funding for the report was provided by the Alliance to Save Main Street Jobs, whose members include the Retail Industry Leaders Association, the American Hotel and Lodging Association, the U.S. Chamber of Commerce, the Associated Builders and Contractors, and the Real Estate Roundtable. The Alliance is chaired by HR Policy Association.
# # #

Selected Quotes from “The Case Against the Employee Free Choice Act”

On Mandatory Arbitration of Terms & Conditions
“¢ This new innovation [interest arbitration] marks a complete departure from the current law which provides that once a union has been certified, both the union and the employer fall under an obligation to bargain in good faith.

“¢ The prospect of arbitration could easily lead one side to hold out”¦if it thinks that the arbitration panel will come out its way. Thus the likelihood of a voluntary agreement could easily go down under this system, which puts greater pressure on the still unknown arbitration process, as unions may have a strong incentive to hold out for a strike it rich settlement, especially if they think the decisive arbitrator is on their side.

“¢ Nothing in the statute settles questions of how arbitration panels are to be set up, the scope of their powers, or the reviewability of their decrees on matters of fact and law. Nor does EFCA make any effort to indicate the set of relevant considerations for the arbitral decrees, and in this regard is in sharp contrast with the detailed specifications of procedures and standards found in many state laws that require interest arbitration in the public sector.

On Card Check vs. Secret Ballot Elections
“¢ It is easy enough to see why labor unions would support card check procedures. They improve the union’s chances of gaining recognition, even if they limit the voice and remove the votes of dissenting workers.

“¢ But in (the unions’) zeal to condemn the employer they never explain why it is necessary to leap to the card-check outcome without figuring out how to expedite or improve union elections within the current framework”¦Nor do EFCA supporters address the allegation that union organizers, or overzealous pro-union employees, are also capable of coercive behavior during a union election.

On the Constitutional Implications of EFCA
“¢ Here is the difference between the original Wagner Act, as modified by the Taft-Hartley Act, and the EFCA. The current law regime limits the right of an employer to walk away from negotiations with the union, but did not force it to accept any particular contract that it found unacceptable. The union could not therefore impose on the firm a losing arrangement that made it impossible for the firm to work with the union. That level of employer self-protection is what saves the NLRA from constitutional invalidation. Hence the parallel to land use restrictions. But the EFCA by imposing a mandatory first-contract arbitration scheme forces the employer to accept a deal which is in no part of its making and in so doing to open its entire business (and trade secrets) to the union. There is a vast difference between having to negotiate and being forced to accept a result that could create a disadvantageous contract, including one that could lead to bankruptcy.

On the Social Consequences of Unionization
“¢ The key point to remember is that there is, going forward, no identity of interest between the unions who profit from EFCA and the workers whose job opportunities are limited by its passage. A far better strategy for helping worker interest is to opt for a more competitive labor environment at home. In the end new job creation will swamp whatever distributional gains the EFCA promises for some select group of workers. Increased coercion never leads to increased productivity. EFCA will surely exert an overall negative effect on the wages and job opportunities of employees.