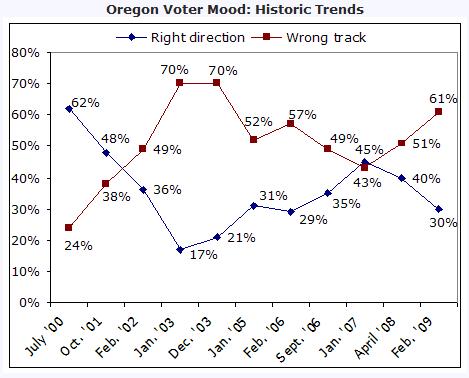 With the current economic downturn now being categorized as potentially the worst financial crisis since the Great Depression, it isn’t surprising to learn that the mood among Oregon voters is at a six year low. Following are the details.

Historically, voter “mood” is directly correlated with the state of the economy — in good times, optimism soars, and in bad economic times, we see hopes fade. Our most recent survey shows fully 61% of Oregonians believe things in the state are generally off on the “wrong track,” while only half as many are holding on to a more optimistic outlook (30% say things are headed in the right direction).

Today’s sentiment is clearly the most negative we have seen in the last six years. Prior to this, our lowest point was in 2003 when as many as 70% of Oregonians were pessimistic about the direction of the state.

Looking at mood by subgroup, we find pessimism prevails throughout the state, however, this sentiment is highest in areas outside the Portland metro area and Willamette Valley, while Multnomah county voters appear less doom and gloom than the rest of the state. By party, we find Democrats are divided in their current outlook, but for Republicans, the view is dismal (82% wrong track), and Independents are not enthused either (55% wrong track).

Outlook
Mood is often an indicator of election outcome. Incumbent officeholders typically fare better when people believe things are headed in the right direction, but are vulnerable when the majority believes things are off on the wrong track. A good national example of this correlation is in both the 2006 and 2008 elections — in both cases, most voters felt the country was off on the wrong track and Democrats gained control of the House (2006), and the Presidency (2008). If current pessimism continues, this could benefit Oregon Republicans in the 2010 election.