I am writing this newsletter from 47,000 feet, somewhere over the Pacific Ocean east of Japan. After twelve days in the People’s Republic of China, our 2006 Oregon Legislative Trade Mission is coming to an end. Since we are flying east across the International Date Line, we will arrive in Portland one half hour earlier than the time in Beijing when we left. 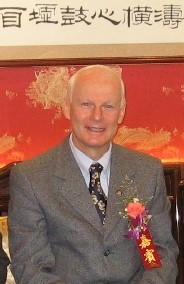 Although this was my third trip to China I again come away with a sense of amazement. I wish each of you could have been there with us. The sights, sounds and cities are of epic proportions.The population is officially set at 1.3 billion, yet some estimates place it closer to 1.5 billion. Just the difference in population estimates would fully populate the combined nations of Germany, France and Great Britain.

To put the size of China into prospective, China has between 100 and 160 cities with populations in excess of one million people; it is the largest producer of steel (21% of world output), and is the largest consumer of steel (27% of worldwide consumption). Focusing just on the motor vehicle industry, consider the following: “China became the world fourth largest automobile producer and the third [largest] auto consumer in 2004. It manufactured 5.07 million automobiles, 17 million motorcycles and 2 million farm transport vehicles in 2004, and had accumulated 27.42 million automobiles, 79 million motorcycles and 25 million farm vehicles. Among the 310 million tons of petroleum consumed in China in 2004, one third was utilized as fuel for vehicles.” (Report on the State of the Environment in China””2004)

For more than a decade, China’s economy has expanded its Gross Domestic Product (GDP) growth rate by nearly 10% per annum. During the same period, the America’s GDP growth rate has hovered around 3.3%. To put this into a worldwide perspective, China’s annual GDP growth rate is three times that of the U.S.A.’s annual growth rate, while France, Italy, Great Britain and Germany have lower GDP growth rates per capita than 46 of the 50 states in the U.S. And, although the U.S. is the largest economy in the world today, it is estimated that China will overtake the U.S. in economic size by 2020.

The purpose of the above is to confirm two things. First, China is an awakening giant that will dominate manufacturing, agriculture, utilization of natural resources and tourism worldwide for the foreseeable future; and second, Oregon’s legislators, public officials, and private business leaders should coordinate efforts to participate and partner in China’s dynamic economy for the benefit of both peoples. It was for these two purposes the 2006 Legislative Trade Mission went to China.

Our trade mission was presided over by Senator Roger Beyer, State Representative Billy Dalto and myself and consisted of legislators, business leaders and private individuals. While in China we met with top government officials at the Fujian Provincial People’s Congress.

In addition, we formally opened the Oregon Fujian Sister State Association’s business office in Fujian Province’s capital city of Fuzhou. Having a business office in Oregon’s sister state’s capital city has great potential for enhancing relationships between the two states, and will provide opportunities to promote Oregon in ways not possible without a physical presence in China. This China office is sponsored by the Oregon Fujian Sister State Association (OFSSA), a non-profit Oregon association of business leaders, private citizens and Oregon legislators who have a common goal of promoting better relations between Oregon State and Fujian Province. Thus, the goal of the OFSSA China Business Office is to promote mutual benefit for Oregon and Fujian economically and culturally, and to do so without cost to Oregon taxpayers. (Even this trade mission was funded without public money.)

Although several boxes of literature were sent to the OFSSA China office by Travel Oregon and Oregon’s Economic & Community Development Department (OECDD), for distribution at this multi-day event, the interest in Oregon was overwhelming and the supplies were soon exhausted. At the Tech Fair, one of our delegation members made a key contact that resulted in a signed contract before leaving Fuzhou.

In short, China is a rising giant for the 21st century and America’s interactions with China over the next decade may determine the nature of the relationship between these two giants. Oregon State and Fujian Province have had a sister-state relationship for 22 years, and it is the commitment of Oregon and Fujian legislative and business leaders to strengthen bonds of friendship and business relationships and enable our states, our nations and our peoples to work together for the benefit of all. By so doing the futures of our states and our nations are made a little brighter.