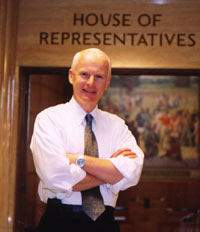 The Governor of Oregon has an entire department of economists and financial analysts who assist in preparing the Governor’s Recommended Budget. By Oregon statute, 291.216(2) the Governor proposes to the legislature a balanced budget for each biennium. To be a “balanced’ budget, there must be at least enough money in the revenue column to pay the expenses in the expenditure column. It is now clear our current Governor has violated his statutory duty by sending to the Legislature in 2003 and 2005 budgets that were at least $77 million out-of-balance from the day they were recommended. In the Capitol, this inherent short-fall has become known as the “Tobacco and Provider Tax Cash Flow Problem.”

The issue is confusing and nearly impossible to find from reading budget documents, but the “Problem” is this:

In the 2003-05 biennium Governor Kulongoski recommended and the legislature passed and the Governor signed a DHS budget that assumed $77 million of revenues from tobacco taxes and health care provider taxes that would not be received during the biennium. At the outset it was known those tax obligations would be incurred during the final quarter of 2005, but would not be collected until months after the biennium had ended. In short, notwithstanding the requirement for a balanced budget both the 2003-05 and 2005-07 budgets were approved knowing DHS would not have enough revenue to pay for its final three months of expenses.

Because of the complexity of the DHS budget, the 2003-05 “Problem” did not surface until the Spring of 2005. At that time, DHS came to the legislature with a request to “borrow” enough money to keep its doors open during the final three months of the biennium. The loan was for $77 million and DHS promised to pay it back from the tobacco and provider tax reviews and federal sources of money that would be collected for DHS after the 2003-05 biennium ended. As you will recall from a prior newsletter when it came time to pay back the loan, for various reasons DHS only had $22 million to pay on the $77 million loan. About half of the $55 million shortfall was justifiable and the other half resulted from DHS “miscalculations.” Although DHS assures us that by its recent efforts to reorganize operations, accounting and revenue tracking systems, such miscalculations will not reoccur, the underlying “Tobacco and Provider ! Tax Cash Flow Problem” remains.

During our recent DHS Review Task Force hearing the DHS Deputy Director of Finance did an admirable job of explaining the many improvements being made in DHS operations, accounting and revenue tracking. When pressed to disclose the anticipated “Tobacco and Provider Tax Cash Flow Problem” for the current biennium, he ultimately provided the figure of $78 million. Thus, the next DHS final quarter shortfall will exceed the last one by more than a million dollars, and another loan from the legislature will be required to fill the hole. Such a large, reoccurring shortfall, should not be allowed to continue. It is bad financial policy and it violates the fiduciary requirement that the Governor send to the legislature a Balanced Budget. When all is said and done, the solution to the “Problem” is to face it head-on and budget for actual revenues and actual expenditures, and stop this faÃ§ade that ignores such a large reoccurring budget shortfall.

To avoid continuing this biennial budget bane, the Governor must either increase DHS’s budget by $78 million in the next biennium or split the shortfall amount over two or three biennial budgets. The reality is that a well run state should not continue to budget expenditures on a cash basis while collecting revenues on an accrual basis. The people of Oregon deserve better, and the next Governor’s Recommended Budget should openly and honestly deal with and solve the “Tobacco and Provider Tax Cash Flow Problem.” Since an election is coming and since the Governor with his staff of economists and financial analysts recommends Oregon’s biennial budget to the legislature, it is up to Oregon voters to get a commitment from each Gubernatorial candidate to solve this $78 million “Problem” and implement a truly balanced budget.