Moore Information did a poll on the name ID and approval rating of possible Oregon Democrat candidates. Poll Here: 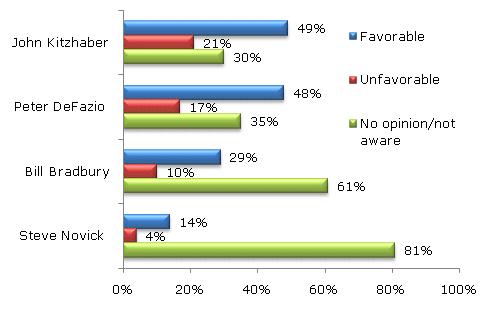 So many Democrats “¦ so much time until the Primary. If you asked a Gubernatorial ballot test in Oregon today, what you would get is the winner of a popularity contest, not necessarily the strongest candidate. So, rather than ask Oregon voters a series of potential Primary and General Election match-ups at this early stage and pitting one Democrat hopeful against the other, we asked a series of image scores to gain a better understanding of how each candidate is viewed among voters across the geographic and political spectrums, among Democrats and Republicans alike, and among those pesky Independents too. And with this understanding, we hope to have a better idea of the strongest Democrat candidate for Governor in 2010.

We tested four of the most talked about names who have indicated, or who others have indicated, could or should make a run for Governor. John Kitzhaber and Peter DeFazio have the most positive image scores statewide today, while voters are less likely to be aware of or have an opinion about Bill Bradbury, and Steve Novick is a virtual unknown.

Kitzhaber and DeFazio enjoy very similar favorable/unfavorable ratios of more than two-to-one, while voters who are familiar enough with Bradbury to have an opinion about him are favorable by a three-to-one ratio. Novick’s image is positive, but with eight-in-ten having no opinion or unaware of him, he is not really a consideration when compared to the others.
Images of Potential Democrat Gubernatorial Candidates

With an eye towards the Democrat Primary, Kitzhaber and DeFazio have similar image scores among the party faithful, and we could expect a very competitive contest if they both entered the race, with a possible bruised Primary victor served up to the GOP candidate in the General.

Looking ahead to the General Election, we are going to give the “strongest Democrat candidate today” award to Peter DeFazio. Why? Although Kitzhaber has a slightly better image score than DeFazio among Independents, Republicans are more negative about Kitzhaber than they are about DeFazio. And naysayers who think DeFazio is a non-starter as a candidate outside of his district are in for a surprise. Although he is less well known than Kitzhaber in the Portland metro area, DeFazio’s image holds up nicely in Multnomah, Clackamas and Washington Counties, while Kitzhaber’s unfavorable ratings hover around 25% everywhere outside of Multnomah County.