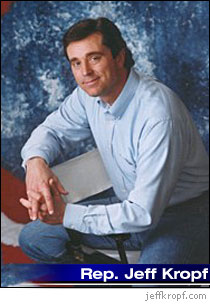 The U.S. Senate has just helped Oregon pass a parental notification law. The story last week on the front page of the Oregonian cynically trumps the parental rights measure that has made the ballot. Now I say cynically because the reporter states in the very first sentence that it will reignite the political war over abortion here in Oregon, by setting the tone of the entire article. After all it has got to be sensational and controversial to be worthy of expensive print space – right?

Because the U.S. Senate vote reflects America’s changing attitudes towards abortion. Those common sense restrictions continue to gain support among Americans. People just don’t buy the rhetoric anymore of those pro-abortion advocates who will do and say anything to stop any restriction on abortion.

Now why is this happening? Because of decades of unrestricted abortions and its negative effect has created a moral backlash. One only has to look at the actual statistic about abortion to understand that in most cases it really is being used as a form of birth control. Which is reprehensible to most Americans, as numerous polls have shown over the years.

Yet, in spite of this the extremists views of those who defend unrestricted abortion is what the Oregonian article uses as its sensationalistic quotes. Words like, “This measure is unsafe, unrealistic, unnecessary” by Planned Parenthood spokesperson, I predict will actually help the parental notification measure to pass.
Because those words not only defy logic, but they fail to recognize Oregon’s changing attitudes about abortion — especially teenage abortion.

The absurdity of requiring parental permission for minor girl to receive aspirin at school versus that same girl being able to receive an abortion without her parents being notified, let alone getting permission. That recognized absurdity is what will cause this measure to pass in Oregon. It is also what lead the U.S. Senate to pass its bill banning this practice across state lines.

Parental rights, common sense, and the backlash against decades of unrestricted abortion are the reasons why this measure will pass in Oregon. The tired old rhetoric of the left and the cynical sensationalistic reporting of the Oregon won’t stop it this time, but I say will help it pass.

Now if we can only stop the taxpayer funding of abortion. Hmmm.

This has been Waking Up on the Right Side with Jeff Kropf.