Today, the May 2009 Revenue Forecast was released. Although it substantially decreases even further the expected revenues for the current 2007-09 biennium, the Forecast is not as dire as many expected for the upcoming 2009-11 biennial budget. When today’s Forecast is considered in light of the “Back to Basics Budget” strategy described below, Oregon State’s current financial crisis appears to be manageable — at least until the next forecast is released in September.

Oregon’s Current 2007-09 Budget. Today’s May 2009 Revenue Forecast “wacked” another $351 million in cuts from the current 2007-09 Budget. This is in addition to the $862.5 million reduction made only two months ago. Thus, from the original $15.1 billion 2007-09 budget adopted by the Legislature in June 2007, the reductions in state revenues have required a total of $1.2 billion in cuts, fund sweeps and federal stimulus dollar back-fill in order to maintain a balanced budget through the June 30, 2009 end of the current biennium.
With substantial additional rebalancing, we will make the adjustments necessary to complete the final six weeks of the current budget period. The big question is what will happen for the next two years?

Oregon’s Upcoming 2009-11 Budget. Today’s Forecast, when viewed from the Co-Chairs perspective is confusing. It shows a total “shortfall” of $3.6 billion, which only tells us we are dealing with a lot of money. What, in the context of Oregon’s proposed budget, does a “$3.6 billion shortfall” mean? No one really knows. It is not an exact figure. It represents the difference between today’s revenue forecast and the uncertain, inflated $16.7 billion “Essential Benefits Level” (EBL) budget. (For a review of the EBL and an example of how it is inflated, click here.) About the only conclusion we can draw from the “shortfall’ reference point is that, for the ’09-11 budget, the shortfall will be $800 million less than the Ways & Means Committee Co-Chairs had feared, since for the past two months the Co-Chairs have been preparing for the worst by discussing a possible $4.4 billion shortfall in the May Forecast. Discussions focusing on “shortfalls” cause angst and fear because they sound so terrible, without providing a clear understanding of where we are and what needs to be done to create a balanced budget. What the Legislature needed was a common sense approach to budgeting.

Oregon’s Back to Basics Budget. This week the Senate and House Republicans proposed such a common sense strategy to balance the budget without raising taxes. It is called the “Back to Basics Budget“ because it asks and answers the following basic budgeting questions:
1. What are Oregon’s assets? (Oregon’s revenue forecast and cash assets on hand),
2. What are Oregon’s current expenses? (Oregon’s current 2007-09 budget), and
3. What additional expenditures are required to maintain the state’s current levels of services? (Although reforming government spending is needed, balancing the budget is the focus of this budgeting strategy.)

The Back to Basics Budget answers the above three fundamental budgeting questions as follows:

Oregon’s Additional 2009-11 Expenditures — Funded from $929 million Current Resources and Savings. Additional current assets are utilized from the following sources:
(a.) $429 million from specific sources of funds and savings, set forth here.
(b.) $500 million from the $2.9 billion of ending balances that are not constitutionally or contractually protected.

Added to the $15.102 baseline budget will be the costs of the Department of Human Services’ increased caseloads, federal requirements for “maintenance of efforts,” costs to cover newly hired state troopers, and constitutionally required additional expenses. The costs of these additional expenditures will be paid from the $855 million in reserves that remain following payment of the baseline budget. Thus, an $855 surplus remains after the $15.028 of available revenue in enhanced by $929 million in current assets and savings, and reduced by the $15.102 baseline budget. After the payment of the additional 2009-11 expenditures, there will be a substantial cushion left-over to deal with further reductions in revenues that may be announced in subsequent revenue forecasts.

In short, the Back to Basics Budget is a rational, common sense approach to creating Oregon’s 2009-11 budget. It balances the budget by utilizing current assets in a responsible manner and by cutting $250 million in pay increases the Governor gave his lieutenants without legislative approval. In addition, it balances the budget without raising taxes on Oregonians, who are enduring the worst economic downturn since the Great Depression.

By contrast, the Co-Chairs have been floating the possibility of a $500 million tax increase, half of which ($250 million), is intended to fund the ill-advised 30% pay increases bestowed by the Governor on a select number of his directors and cadre. Next week, we will all be interested in whether or not that $250 million largess remains in the Co-Chairs’ Budget. As the next paragraph demonstrates, one lesson is clear, Oregon cannot continue to spend as it has in the past.

Oregon’s Future Budget. In ten years, Oregon’s budget will be $102 Billion. That is the message from a physicist who read last week’s newsletter, Oregon Prepares for Final Budget Phase.” He extrapolated and plotted the data from the newsletter’s historical spending graph. In his email, the physicist stated the following: 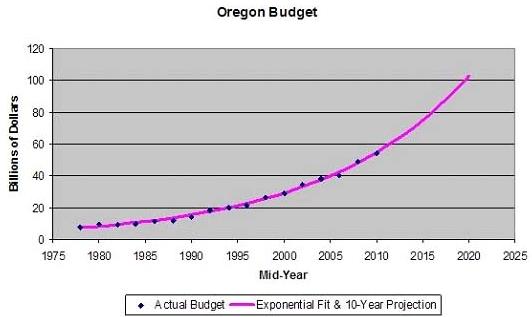 From the above graph, it is clear. This physicist is right. We are crazy if we think we can continue to spend as we have in the past. It is time to control spending and reform the way Oregon crafts its biennial budgets.

Conclusion. Oregonians are out of work and Oregon businesses are closing their doors. These realities mean gross reductions in Oregon income tax revenues will continue until the economy recovers. The Back to Basics Budget strategy demonstrates the crisis is manageable and no new taxes are required to keep the state budget balanced. Nevertheless, economies must be made, a portion of current assets must be utilized, and Oregon must face the fact that its spending patterns truly are unsustainable.

Oregon’s Legislators and the Governor should utilize the Back to Basics Budgeting strategy to pass the 2009-11 budget, then prepare for the possibility that the current recession will last longer than the State Economist has suggested in the May 2009 Forecast. Oregon should stop increasing its debt, stop expanding its programs, and stop escalating its unsustainable spending. In addition, Oregon should reform its budgeting process, and enable Oregon businesses to stabilize by reducing costs, fees, and regulations. By doing the above, instead of raising taxes on stressed Oregon taxpayers, Oregon could clear the bureaucratic and financial roadblocks that burden Oregon small and large businesses.

Instead of looking for revenue increases that add to the financial burdens carried by those who pay taxes, Oregon should encourage its most successful business men and women to create more jobs for Oregon workers.

Government cannot produce wealth; it can only redistribute it from one sector of its population to another. To promote economic recovery, government must provide a business-friendly environment, so the private sector can bring about a lasting economic growth. Jobs are the key to recovery. I along with the Oregonians who hire Oregon workers, who build lasting businesses and who pay most of the taxes want “Change, We Can Believe In,” and it will take a reformation in Oregon’s financial practices to enable it to occur.