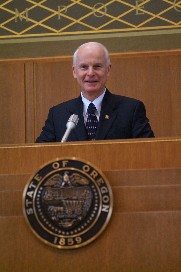 My father used to say, “He who pays the piper calls the tune.” Since the Federal government contributes $6 Billion dollars each biennium toward Oregon’s health and human services programs, the Feds call the tune and Oregon dances.

As we watch the financial orchestrations in Washington D. C., Oregon and the other states are getting very nervous. For example, effective October 1, 2006, TANF (Temporary Assistance for Needy Families) has the requirement that for states to receive federal money 50% of TANF recipients must be employed. Oregon along with 46 other states fails to meet the 50% requirement. Oregon has only only 16-18% of Oregon’s TANF recipients employed. If Oregon fails to comply with the 50% employment requirement, Oregon’s DHS budget will incur a substantial penalty in reduced federal revenue.

Complying with federal requirements is expensive. DHS Director Bruce Goldberg estimates the burden of achieving TANF’s 50% employment requirement will cost $20 to $50 million every biennium. The Fed’s determination to either get compliance or cut funds is as serious as a heart attack. Next week I am flying to Seattle for a meeting with federal officials to discuss the technicalities and timelines for complying with the 50% employment rule and other TANF re! quirements. It is going to be a grim meeting.

Although I fully agree with the requirement that TANF recipients work if they are able, why has the federal government suddenly imposed a requirement that places 47 out of 50 states out-of-compliance? One reason is the Fed’s need for money. The federal deficit this year will be $470 Billion, and as Ben Franklin might say if he lived today, “A $100 million saved is a $100 million earned.” There is big money to be saved by cutting back on human services subsidies to non-complying states. The federal government’s need for money is a long-term, serious matter. The federal government has incurred a total fiscal exposure of $46 trillion. Stop and consider what an astounding number $46 trillion really is. It is 46 thousand billion dollars! Your share, along with every other American’s is $156,000. It represents $375,000 of debt for every American worker, and it represents $411,000 of debt for every American household.

Putting Oregon’s financial house in order is a key focus for the State Legislature, and Oregon’s financial future is inseparably connected to the financial future of our country. Without a national course change, Oregon’s ability to provide essential services for Oregonians is in jeopardy. It is time for every American to wake up to the fact, our Congressional spending patterns are heading us toward financial disaster.

For those who want a more documented dose of reality, consider the following:

The U.S. Comptroller General is America’s chief financial accountability officer. The office has a 15-year appointment and the charge to serve as the head of the U.S. Government Accountability Office (GAO). Since 1998, David M. Walker, C.P.A., has served as the U.S. Comptroller General. General Walker is a non-partisan, sober and courageous certified public accountant who has traveled widely sounding the alarm about the financial crisis looming for the United States federal government. He wants Congress to pull away the curtains, stop the rhetoric and “put everything on the table”.

General Walker says, “We have to educate the American people as to the nature, extent, and magnitude of our challenge and the consequences to our country, their children, and grandchildren if we fail to act.”

General Walker stated the following about Medicare and Social Security:

“Last year, we took $174 Billion in additional revenues that came in for Social Security and we spend it on other government operations. *****

– To put our federal government back on a stable financial course, General Walker makes the following four suggestions: Revise existing budget processes and financial reporting requirements.
– Restructure existing entitlement programs.
– Re-examine the base of discretionary and other spending.
– Review and revise tax policy and enforcement programs – including tax expenditures.

It is worth the time to read two recent articles setting forth Comptroller General Walker’s terse analysis and warning for all Americans. They can be found by clicking on the following: “U.S. Comptroller General Warns the Nation of Economic Calamity” and “The Nation’s Accountant Tells It Like It Is.”