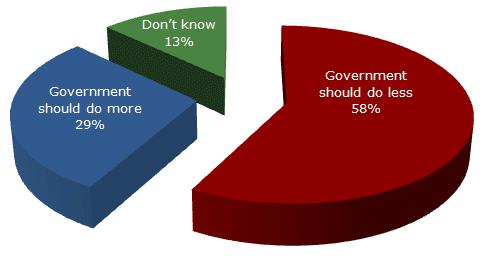 President Obama continues to enjoy high job approval ratings and even higher personal ratings. People like the President and, given the state of the economy and other problems facing the country, voters want him to do well. They may be uncertain if his policies will work but so far they are willing to give him the opportunity to implement his programs. In fact, in our most recent national survey we found his approval rating at 60% and a majority of Americans (54%) saying they support the President’s stimulus and budget plans.

High approval ratings and majority support for Obama’s signature programs would indicate an administration at the top of their game with little reason to be concerned about Republican opposition. Indeed, when we look at voters’ confidence in Republicans in Congress to solve problems we see little reason to think differently. A recent Gallup poll1 showed that only 38% have a great deal or fair amount of confidence in the Republicans in Congress to do the right thing for the economy. Furthermore, in our recent survey the GOP trailed Democrats on the generic ballot by seven points (42% to 35%).

So where is the good news for Republicans?

Well the good news is that the American voter still believes in smaller, less intrusive government and is quite concerned when asked about the potential negative ramifications of the Obama spending plans. Moreover, from a political perspective, the American voter is already, just four months into Obama’s tenure, inclined to elect Republicans to provide a check and balance on the President and the Democrats in Congress. And by a very significant margin. Here’s how our question looked and the results:

“Now I’m going to read you two statements. After hearing each, please tell me which statement comes closest to your own view.

Some people say it’s important to vote to elect more Democrats to Congress to help support President Obama and his policies and to allow Democrats to implement their agenda.

Other people say that Democrats are already in control of the White House, the Senate and the House of Representatives and we should vote for Republicans for Congress to help keep a check and balance on President Obama and the Democrats in Congress.” 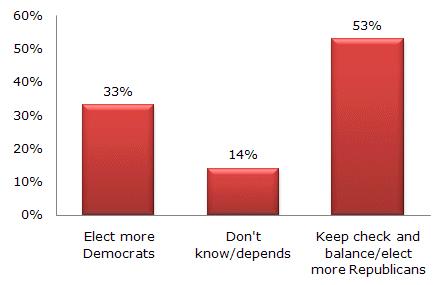 Even a plurality (42%) of the voters who approve of the job Barack Obama is doing believe government should be smaller and do less; and voters who support him on the stimulus are mixed on whether government should be bigger and do more (43%) or smaller and do less (39%). If there appears a disconnect here, much of that can be attributed to the urgency voters feel about the state of the economy and their willingness to give the President the benefit of the doubt — for the time being — to try and solve the problem. But in the few short months he has been in office, Barack Obama’s policies have refocused Americans on the proper role for their government and they’re not looking for more of it.

These numbers are even more encouraging for Republicans when compared to a similar question we asked back in 2008.

In April of last year, we found that 46% of Americans felt government was “too big”, while 27% said government was “not doing enough” and 14% felt the government was about right and needed “no change.” Granted — this is a slightly different question with the third “no change” option, but the two-option question pushed people into one camp or the other, and today they clearly opt for a smaller government that does less.

For the time being, at least, Republicans concerned about being perceived as heartless budget-cutters can relax. Obama’s embrace of ever expanding government has severely restricted Democrats’ ability to effectively employ that line of attack on fiscal conservatives.

Looking more deeply into the Obama stimulus and budget packages we asked voters a series of questions on potential ramifications of the Obama spending plans and found large majorities less likely to support his plans when they heard a number of specific arguments against them.

Here are the messages that voters found most disconcerting about the President’s programs:

“Now, here are some statements about President Obama’s plans. After hearing each, please tell me if you are more likely or less likely to support Obama’s stimulus and budget plans. If it makes no difference, just say so.”

Interestingly, voters of all ages were moved similarly by the Social Security message. But, as one might suspect, younger voters appear more motivated than older voters by the foreign debt and the “taxes and fees” messages.

In the final analysis voters of all ages and stripes are quite wary of the long term impacts of the Obama agenda. These are legitimate voter concerns and legitimate reasons to oppose the President’s budget decisions. As these potential outcomes become more apparent, expect the “check and balance” question to improve even more.