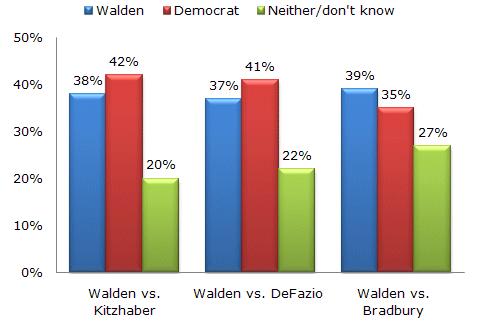 While some political pundits and Democrat leaders would have you believe that Oregon Republican candidates have no future in statewide office, in fact, the 2010 race for Governor will be competitive, as our latest poll shows.

We matched Republican Congressman Greg Walden against three of the leading potential Democrat candidates, and find Walden within four points of both John Kitzhaber and Peter DeFazio, and Walden actually leading Bill Bradbury by a four-point margin today. Statistically speaking, these results are within the margin of error associated with this sample size (+/- 4% at the 95% confidence level).

Importantly, Walden is enjoying the same level or greater party loyalty as the Democrat candidates are among their party faithful. Among the GOP, Walden’s net support against Kitzhaber is +66 points, against DeFazio he has a 58-point margin and against Bradbury, the GOP margin of support is +63 points. Likewise, among Democrats, Kitzhaber’s margin is 57 points over Walden, while DeFazio’s margin is 56 points and Bradbury’s margin over Walden is only 44 points among Democrats. Independents are divided in both the Walden/Kitzhaber and Walden/DeFazio matchups, but Walden has a 14-point advantage with Independents when paired against Bill Bradbury.

Regionally, Walden is the favorite in all three matchups among voters residing in the Eastern, Southern and Coastal regions of the state, while the Democrats are favored in the Portland tri-county region, with Multnomah County being the greatest source of support for Democrat candidates. In the Willamette Valley, however, Walden is in a statistical dead heat against both DeFazio and Kitzhaber, and leads Bradbury in this region by 10 points. Please feel free to call or email with any questions.