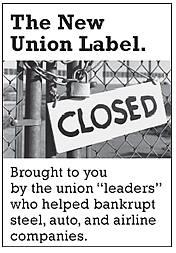 A full page ad ran in The Oregonian & Register Guard, and ads on television this week hitting government unions hard. The group is Union Facts and they are trying to lead people to their website unionfacts.com to expose union benefit packages and hard line tactics. A copy of their TV & newspaper ads can be seen here. It is expected that the group plans to spend over one million dollars in advertisements this year educating the public nationwide. Such counter-union message has rarely been advertised, much less on this scale. (see also Oregonian article today)

This campaign comes on the heels on President Bush’s new union disclosure rules that have made public certain union budgets over $250,000.00. That in itself has uncovered millions of dollars of union dues spent on luxury items, expensive meals, golfing, vacation trips and more.

Will these ads help change the public’s mind? Are they effective or just a low blow? Is this a new long-term debate or just a blip on the screen?