A February 2011 study published by the University of Minnesota’s Smart Politics news site, a part of the Hubert H. Humphrey Institute of Public Affairs, found significant pro-Democrat bias by PolitiFact.

Now fast forward to last week for a fun little glimpse inside the very biased world of PolitiFact.

Last Friday I got an email from Ryan Kost at the Oregonian’s PolitiFact about an obscure article we ran on July 17th on Oregon Catalyst. The article talked about Oregon House Joint Memorial 20 – which urged the U.S. Congress to investigate the alleged abuses of power by the IRS and to take legislative action to correct the abuses. The article then went on to point out that HJM 20 died on Oregon House Speaker Tina Kotek’s desk – it was never assigned to a committee for consideration.

Ryan’s focus was on the statement “it was the ONLY bill not assigned to a House committee.” and he asked if I could please put him “in touch with the author of the piece so that they might have a chance to respond to this.” 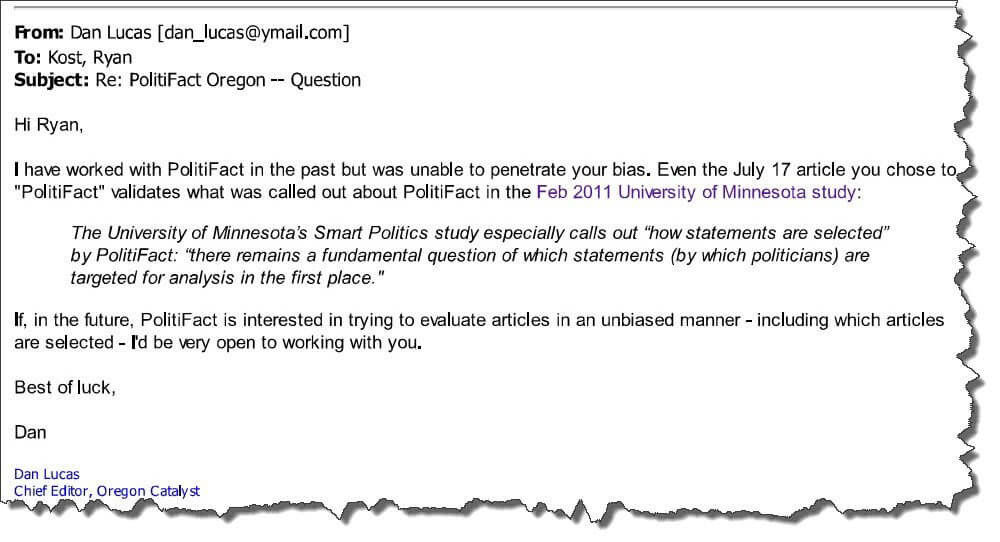 Meaning to assure me he wasn’t biased, Ryan let me know he’d only returned to PolitiFact after six months covering Portland City Hall. What better way to get rid of a progressive/liberal bias than to immerse yourself in the bipartisan waters of Portland City Hall? Where both the far left and the extreme far left are given equal voice. But it wasn’t any bias on the part of Ryan that was of concern – it was the institutional bias of PolitiFact – the bias noted in the 2011 University of Minnesota study.

To respond in any way to the biased question plays into the pre-defined PolitiFact charade – kind of like trying to answer the question “Have you stopped beating your wife?” As the University of Minnesota study noted, PolitiFact’s bias manifests in which articles get selected.

Rather astonishingly, I thought, to reassure me of the objective nature of his inquiry, Ryan stated that “Statements had been entered in our database and I simply picked up the most recent to start evaluating.” Wow. Did he really think about that before he wrote it?

It begged the question:

Which got this nice response from Ryan: 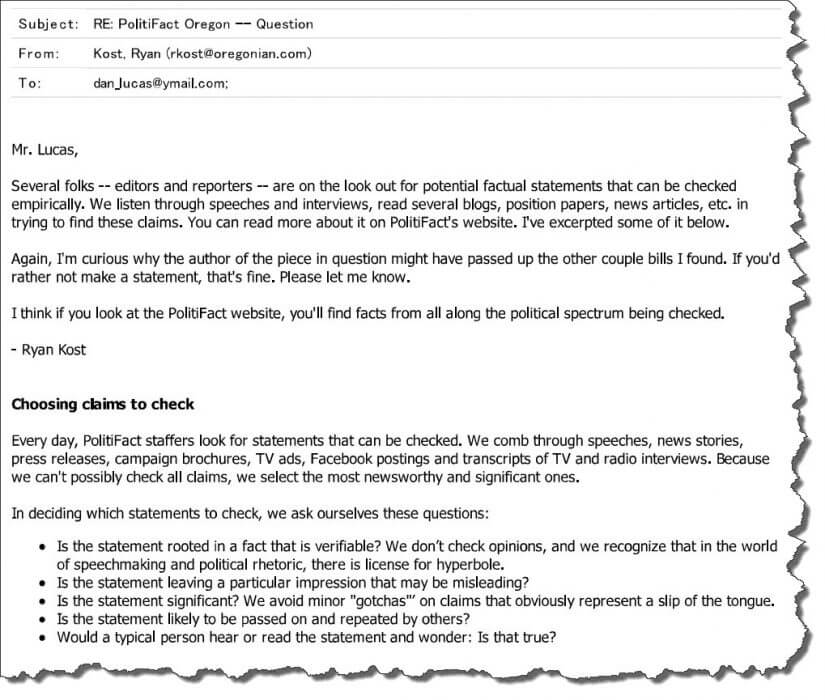 Ryan had sent me PolitiFact’s “Choosing claims to check” criteria, which stated that PolitiFact only selects “the most newsworthy and significant” statements in “speeches, news stories, press releases, campaign brochures, TV ads, Facebook postings and transcripts of TV and radio interviews.”

So to the Oregon PolitiFact staff, the “most newsworthy and significant” story of the legislative session was:  (multiple-choice)

1. Tina Kotek publicly blowing her credibility on a key tax vote, “We’ll have the supermajority to pass the revenue package” – NOT!

An op-ed in the Daily Astorian noted “House Speaker Tina Kotek demonstrated her inexperience by allowing only one of 40 PERS bills to get a hearing, infuriating many legislators whose votes she would later need,” and said “The PERS bill that managed to pass the Legislature on a party-line vote by Democrats is not commensurate with the scale of Oregon’s pension problem. It promises minor savings this next biennium. It uses accounting gimmickry to postpone costs. And it fails to deal with the underlying problems.”

4. Tina Kotek’s push for $275 million more in taxes despite a $2 billion general fund increase (13.6%) from the last budget cycle

5. An obscure “House Joint Memorial” from the Oregon legislature that urges the U.S. Congress to investigate the IRS – that died on Tina Kotek’s desk.

If you’re as unbiased as PolitiFact, if you’re able to keep things in perspective, if you know what Oregonians are talking about, what they’re “passing on and repeating to others”, the choice is clear. It’s number 5, right? I can’t remember a single place I’ve gone in the last few weeks where I didn’t have to listen to talk of HJM 20. Complete strangers at restaurants & grocery stores can’t stop talking about HJM 20. Right?

I tried one more time with Ryan:

True to his word, Ryan completed his PolitiFact and it ran in the Oregonian late on Monday. It doesn’t look like I made much progress with him.