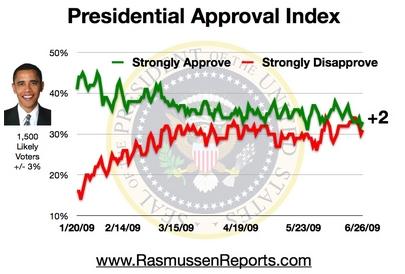 We are closely following Barack Obama’s job approval rating because it provides us with a key indicator of the public’s response to Democrat policies and it will be an important factor in candidate performance in the 2010 midterm elections.

Highlights:“¢ Daily tracking poll results released over the weekend show for the first time that more Americans strongly disapprove (34%) of Obama’s job performance than strongly approve (32%). This represents a continued erosion of the intensity of Obama’s support from a high point of 45% reached on January 31, to near its low point today. Source: Rasmussen Reports

“¢ Total support for the President continues to slide from a high point of 65% on the day after he took office to 53% today. For much of January and February the President’s approval numbers were in the 60%+ range. In March and April they dropped to the high 50%+ area, and now have slipped further to a low 50%+ range. His disapproval numbers have remained in the mid-40% for much of June.

“¢ The decline in support for Obama is reflected across multiple polls. While polls conducted by multiple research firms show slightly different results in terms of total support, the pattern of decline for Obama is consistent. Gallup reports Obama’s support has dropped to a new low of 58% in their surveys.

“¢ The decline in Obama’s total support can be largely attributed to independent and Republican voters turning away from the President. This month alone, Obama’s job approval among Republicans has dropped from 29% to 21%, while independent support sank from 61% to 53%.

“¢ Presidential approval ratings have historically had a significant impact on each party’s performance in mid-term elections: the lower the President’s approval numbers, the worse his party’s candidates for Congress and state legislatures perform.

“¢ The party holding the White House has experienced a net loss of Congressional and state legislative seats in 10 of the last 12 mid-term elections, going back to 1962. Voters trend toward a desire to compensate for the perceived excesses of the party holding the White House. This desire is reflected in a distinct advantage for the opposition party.

“¢ The decline in support for Obama has coincided with a shift in voter trust toward Republicans on multiple issues. While Democrats were trusted more than Republicans on all 10 of the top issues of concern to voters in 2008, Republicans are now trusted more on six of 10 top issues, including taxes, the economy, Iraq, and immigration. Source: Rasmussen Reports