OREGON CITY, ORE – Surrounded by supporters, State Representative Jason Conger announced plans to run for United States Senate. Conger, who personally grew up in poverty, says he was motivated to run by the financial instability and insecurity facing poor and middle class Oregonians today, and Washington, DC’s failure over the last six years to address these issues. “Every Government statistic represents a very real human story – real people and real tragedy for their families. I know because I was once one of those numbers,” explained Rep. Jason Conger.

Conger is no stranger to the struggles that Oregonians face. He grew up in poverty and understands what it is like to go through difficult times. “I know what it means to be in need. I was blessed to receive help when I needed it and to help myself out when I was capable. My hardships and my successes have provided a critical balance to my approach to public service,” said Conger, who worked his way through community college, state university, and eventually Harvard Law School. “I know what it takes to help people succeed. I also know this: Democrats and, yes, Republicans in Washington, D.C., seem to forget the struggles that working and middle class families face once they settle in on Capitol Hill.” 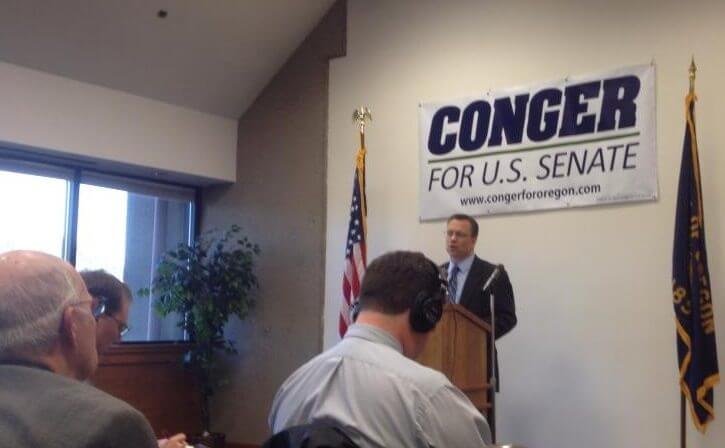 Now, in his second term in the Oregon House, Conger has a strong record of standing up for middle and working class people. He pushed for tax relief for middle and low income families, championed greater educational opportunities for Oregon children, and helped acquire the necessary funding to move OSU – Cascades toward becoming a four-year university. He also played an instrumental role in the health care reforms in 2012 that will reduce costs and improve outcomes for patients.

As the Federal Government suffers through the recent shutdown and record low approval ratings, Conger criticized Washington politicians and says that they are out of touch. “Oregon needs a Senator who doesn’t serve the special interests of Washington, but is instead focused on solving the problems we face – child hunger, poverty, job loss, failing schools and insolvent communities back here in Oregon.”

“We must remember, it is not about where we have been, it is about where we are going,” Conger concluded, “And the decisions we make, the actions we take now shape our future and determine the path upon which we are moving toward that future.”

Conger, who will seek the Republican nomination in the May Primary Election, would face Sen. Jeff Merkley in November 2014. Jason Conger lives in Bend with his wife, Amy, and their five children.