It seems as though the controversy over cultural competency goes on and on. The folks who wanted to make cultural competency mandatory for all new teachers and college staff and professors at the University of Oregon are at it again. This time they want to open a charter school in Springfield, Oregon dedicated to multicultural competency and social justice.

Cultural competency has been deemed too controversial to be included in the Oregon Teachers Standards and Practices Commission requirements for new teachers. And a legal opinion by the Oregon Legislative Counsel’s Office, the legal arm of the legislature, noted that it is unconstitutional to require teachers to advocate for social justice as a condition of employment. 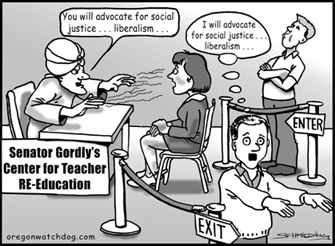 For those of you who are new to the issue I will try to briefly bring you up to speed.

During the 2004 Oregon legislative session, Senate Bill 50 was introduced. On its face it was an innocuous bill. It required all teachers to be culturally competent. Wisely, rather than cast an uninformed vote, Representative Linda Flores, R-Clackamas, and I asked the simple question, “What is cultural competency?”
I set about to answer that question and was surprised by what I found. Cultural competency was defined at the Cultural Competency Summit as requiring teachers to challenge the status quo and advocate for social justice and equity.

We fought SB 50 and it was killed in the education committee of which Rep Flores is Chair. But that was not the end of it. The Teacher Standards and Practices Commission, (TSPC), said they would implement it anyway and it was only through a concerted effort that TSPC decided that cultural competency should not be included in new teacher requirements.

Following this battle, the University of Oregon developed a diversity plan that included cultural competency as a key component. UO had a cultural competency conference to clarify what cultural competency is. What they came up with was that cultural competency is like love. It has many different iterations. You can’t describe it and you can’t define it. But you know it when you see it. Therefore the political notion of cultural competency is in the eye of the beholder and at UO, requiring professors and staff to adhere to cultural competency and advocate for social justice was just another step in big brother dictating how people are supposed to think. According to professor Art Levitt, “Cultural competence is, in essence, a bureaucratic weapon. Cultural competence, or rather, your presumed lack thereof, is what you will be clobbered with if you are imprudent enough to challenge or merely to have qualms about affirmative action, diversity and multiculturalism, as those principles are now espoused by their most fervent academic advocates.” This was rightly described in an open letter to UO President Frohnmayer as Orwellian. The Bend Bulletin and the Albany Herald both wrote stinging editorials against requiring teachers and professors to be culturally competent. Hasso Herring, editor of the Albany Democrat Herald, said in a May editorial, “Mao had his cultural revolution and Vietnam sent people to re-education camps. Some education leaders in Oregon can’t duplicate those efforts, but they are doing what they can.”

Requiring teachers to advocate for social justice is wrong. Teachers should be teaching, not advocating political perspectives. One person’s notion of social justice is different than another’s. Theoretically you could have two teachers with opposite beliefs advocating against each other and each teaching kids their own political perspectives. One thinks abortion is a social injustice to the fetus and therefore advocates against all abortion. Another believes that it is social injustice to limit what women can do with their bodies and therefore advocates for unlimited access to abortion. Neither teacher’s advocacy on the subject is appropriate.

One could advocate that it is socially just to bomb Iran’s nuclear facilities before they develop the bomb while another advocates that it would violate Iran’s national integrity and autonomy. Both perspectives could be discussed but a teacher should not be advocating for either one.

According to her book, “Cultural Competency; A Primer for Educators”, author Jean Moule describes cultural competency thusly, “It is not just a question of if one (Northern Europeans) holds racist attitudes and stereotypes or if one is involved with practices of institutional or cultural racism. We all are.” “Not only is one racist, but also privileged and an “unconscious oppressor” of people of color.” Cultural competency is about challenging the status quo and ending all pervasive but invisible racism. It is the belief that we have to end white privilege.

Is this what a public school should be dedicated to? Is this what teachers in a public school should be teaching students? Hopefully the Springfield School Board will ask the key questions before approving this school. What is cultural competency and whose notions of social justice is the school going to be dedicated to? And what happens to those teachers whose notions of social justice differ from the administrations? Are they going to be silenced, fired, or will they just have to go through a re-education program? And when a teacher sues the district for being required to advocate for a particular notion of social justice, will the voters in the Springfield School District be required to pay the bill?