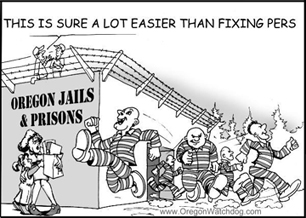 This past week, The Oregonian reported, matter-of-factly, that the Multnomah County Sheriff’s Office was facing a financial crisis for housing criminals. The report went on to note that Multnomah County pays more per jail bed than comparable cities (Seattle) and surrounding counties (Washington/Beaverton and Clark/Vancouver). And the differential was not small. Multnomah County exceeded the jail bed costs in Seattle by thirty-five percent. It exceeded the costs of neighboring Washington County by seventy-five percent and Clark County across the Columbia by ONE HUNDRED AND SIXTY-THREE PERCENT. All of this was based upon a report prepared by District Attorney Michael Schrunk that concluded that Multnomah County’s costs were the highest in Washington, Oregon, and Idaho. Trust me, if those costs exceeded Washington, you can be sure that Multnomah’s costs are the highest in the West, with the probable exception of California.

The story went on to suggest that the big problem was that Multnomah County was housing state and federal prisoners at a cost that exceeded the amount by which they were reimbursed. And that these losses were in large part responsible for the inability of Multnomah County to opens its brand new, never-been-used, Wapato jail that was built at the cost of several hundred million dollars but without thought to the funds necessary to operate. The report then concluded that Multnomah County taxpayers were subsidizing other jurisdictions for housing their prisoners.

The problem is that Multnomah County’s costs are too high and that the county officials steadfastly refuse to attack the real problem in controlling costs. That is not surprising since Multnomah County government is dominated by the public employee’s unions and the unions have imposed a cost structure on the county that is simply unrealistic – particularly as it relates to comparable and surrounding counties. And even though the report contains references to the real cause and effect, it simply turns its back on the real source of the problem or the real path to correction.

The Oregonian notes “The reasons the report cites include a high staff-to-inmate ratio, 3-1 compared with 4-1, “inordinately high use of sick time, comp time and overtime,” and the closures of cheaper jail facilities. The county’s health care costs are 40 to 50 percent higher per inmate than in other communities with accredited health care programs in jails.

There it is. You could list it by bullet points:

This is a public employee union boss’ dream and an efficiency expert’s nightmare. Let’s understand this in its simplest form. Multnomah County employs twenty-five percent more people to supervise the same number of prisoners than do surrounding counties and states. Score a big one for the public employees union which has more people working at taxpayer expense and thereby exact more revenue for itself through the payroll checkoff system.

Multnomah County has more sick time, more comp time and more overtime than surrounding counties and states. This is generally the result of public employee union imposed work rules and lax management by a group of Democrats beholden to the public employees unions for their election and political support. A comparable review of the fire and police services in Portland (Multnomah County) revealed that there were excessive numbers of public employees out on sick leave and disability leave. The essence of such lax management is that you have to hire another person to do the job that you are already paying someone out on benefits to do. Score another big one for the public employee unions which use “work rules” (or in these cases “not work rules”) to force the county to hire more people to do the same amount of work.

It’s your choice. Make a decision and understand the cause and effect.