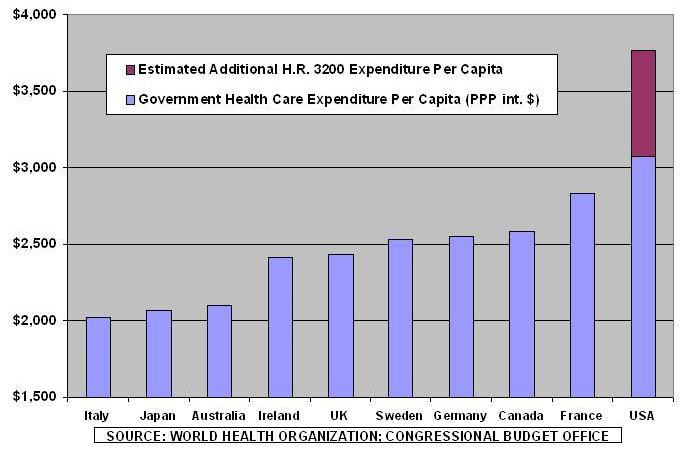 Obamacare proponents have long decried the “failure” of free market health care in the U.S. “If only we had more government money” they said! If only we could throw some more taxpayer dollars at it then everything would be okay!
The free market has failed, so we need government to step in! We have a free market in healthcare in the U.S at the moment? Yeah, right. In fact, the U.S Government spends more per person on healthcare than any other major developed country. I repeat. Per person, when it comes to healthcare the U.S Government spends more per person than pretty much any other government. This isn’t total spending. This doesn’t include insurance or individual payments. This is government spending. Only. These are OUR taxdollars. And we have more government involvment in health than any other major nation.

This is NOT a free market. This is a clear case of government failure.

If Obamacare is enacted, we will be spending close to $4,000 in taxpayer dollars – in the most inefficient way possible. We already spend more taxpayer dollars than Europe on health, and it clearly hasn’t work.

At the moment, the U.S has a world class private system, but also with government muddying the water, interfereing, and creating the many problems that currently do exist.

The solution is NOT to do more of that which has failed. Rather, is it to take advantage of what works: the market.

The solution is NOT more government – it is less.