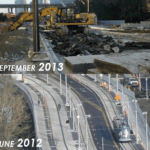 A case study released last week by Cascade Policy Institute shows that the $52 million retrofit to Portland’s Southwest Moody Avenue is already increasing local traffic congestion and will be unable to accommodate future road capacity needs for the South Waterfront district in the future.

During 2011-12 SW Moody Avenue was raised 14 feet and the overall right-of-way (ROW) widened to 75 feet. This was done to accommodate double-tracking of the Portland streetcar, pedestrian walkways on either side, a massive two-way bicycle track, storm water treatment planters, and relocated utilities. The primary purpose of the retrofit was to allow the Portland-Milwaukie light rail line to pass over Moody Avenue at-grade and stop at the OHSU Collaborative Life Sciences Building, currently under construction.

The retrofit reduced lane capacity on Moody for motor vehicles by moving the streetcar directly onto the road (it had previously run on adjacent ROW) and adding a double-track, despite the fact that motor vehicles are the dominant mode of travel in the district. Before-and-after traffic counts conducted by Cascade Policy Institute on Moody Avenue show that the percentage of all trips by automobile has increased since the retrofit was completed, despite the generous ROW allocated to non-motorized travelers.

To make matters worse, in September 2013 the entire road was shut down for three weeks and much of the new work torn up so that the light rail tracks could cross at grade just west of the new Willamette River rail bridge. Since accommodating light rail was the primary purpose of raising Moody in the first place, this additional retrofit simply wasted tax dollars and inconvenienced local travelers. Neither the City of Portland nor TriMet has provide a credible public explanation of why this was done.

According to Cascade President John A. Charles, Jr., “The South Waterfront has long been a Potemkin Village for Portland planners. It’s likely the only neighborhood in the world that will soon be served by an aerial tram, streetcar, light rail, elevated pedestrian walkway, a monster cycle track, and a 100-foot wide pedestrian greenway. But the actual evidence shows that the district is highly reliant on auto use, and the reliance is growing. Now it’s too late to provide road capacity for future build-out because so much space was allocated to the streetcar and light rail.”