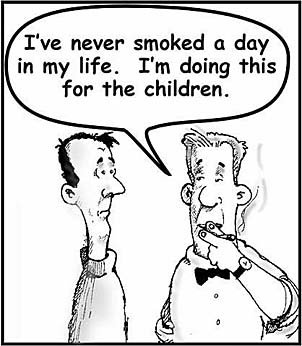 Kulongoski has proposed an 85-cent cigarette tax hike to fund health care for children that may produce the opposite effect. After politicians enacted a $1.28 cigarette tax hike a few years ago, sales dropped by $22 million in just the first six months (-10.4%). Internet sales, border sales and underground markets were blamed for the huge loss in revenue. As we race to become the number one tobacco tax we end up witnessing the tax revenue racing the opposite direction. Under this scenario we have the worst of all worlds where the politicians don’t get their expected tax revenue and Oregonians get overtaxed. I suppose the politicians do get the reward of public acolades for doing something for the children (at other people’s expense and regardless of wether the idea is effective or not). Politicians are so used to taxing without consequence that they have have forgotten that the laws of consumer pricing/choice still do exist. If they overtax a product people will stop buying it or shop somewhere else. If we want health care for kids, why not lower taxes for working families so they can better afford health insurance, rather than raising taxes on Oregonians and shifting children’s dependence from their families to state government.