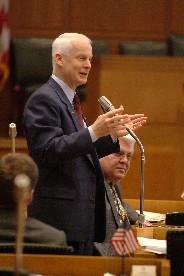 The other morning I appeared on the Jefferson Public Radio (KSOR 90.1 FM) Jefferson Exchange program moderated by guest host Jeffrey Riley. The topic was ballot Measure 43 regarding parental notification for 15, 16, and 17 year old girls before they undergo an abortion. Kelley DeVore of Planned Parenthood Health Services of Southern Oregon spoke against the measure and I spoke in favor of it. While Ms. DeVore and I disagree on the topic, the discussion was amicable and I thank Ms. DeVore for her friendly attitude and demeanor.

1. When appropriate, should the parents be informed before their pregnant teenage daughter receives an abortion? or

2. When a pregnant teenage girl wants to undergo an abortion and is unwilling or unable to talk with her parents, should she first be required to discuss her decision with a designated, impartial adult?
As a parent of 8 daughters, as an attorney concerned about abortions arranged and funded for their victims by adult men, and as a citizen who understands the consequences of such important decisions on a young girl’s life, I say “yes” to both questions. The Medford Mail Tribune Editorial agrees. If you are uncertain in your opinion, please read on.

Several listeners called in during yesterday’s KSOR broadcast. One was a woman named Grace from Roseburg. She related a tragic story involving her daughter. We have linked a copy of Grace’s story if you would like to read it for yourself.

In summary, Grace’s story is a reminder to all parents, that sometimes our children make mistakes. Grace’s daughter was a Senior in high school. She did not have a boyfriend, but one night at a party, things got out of hand. A few weeks later she determined she was pregnant. Like most pregnant teenage girls, Grace’s daughter did not want to disappoint her parents. She went for advice to a family planning clinic. The counselor informed her of her options and told her,

“You can have an abortion and your parents don’t have to know about it. “¦You don’t have to tell them and nobody will find out.”

Grace’s daughter had the abortion. She told only one friend of her predicament. Word quickly spread about the abortion. Grace found out from a family member who told her that her daughter had an abortion and everyone at school knew about it. Grace and her husband were devastated. After asking their daughter about the rumor, she tearfully told them she didn’t want them to be disappointed in her, so she chose to have an abortion.

The daughter’s decision to have an abortion was a turning point in her life. She dropped out of high school with only 3 weeks remaining before graduation. Now, years later, Grace’s daughter, “is still experiencing deep grief and depression associated with making a decision to abort her baby.”

Requiring notification to parents or another designated adult is not unique to Oregon. In fact, Oregon is only one of 6 states that do not have some type of parental involvement legislation. Why do 44 states have some form of parental involvement? Because having an abortion is a monumental decision, and teenage girls need to talk it over with an adult before making it.

A study published in Family Planning Perspectives found that for girls in this age group, 60% failed to inform their parents about having an abortion. Of girls whose parents did not know they were pregnant 89% consulted only their boyfriend…89%. In a State where girls cannot get their ears pierced or get even aspirin from a school nurse without parental consent, how can we allow our daughters to make such a life changing decision without first talking to a functioning adult?

There is another reason why an adult should be consulted before a teenage girl consents to having an abortion. Sometimes the pregnancy results from incest or other sexual abuse. In those cases, talking to an adult can prevent the perpetrator from impregnating a young girl, taking her to an abortion clinic, then returning her to the abusive situation with no one the wiser. I explain this situation in my Voter’s Pamphlet article in favor of Measure 43. It reads as follows:
As a member of the Oregon House of Representatives, I was honored to be the chief sponsor of the PARENTAL NOTIFICATION BILL. After thorough review by legislative legal experts and close scrutiny through public testimony and legislative debate, the bill was passed by the Oregon House. Its opponents then killed it for political reasons. We citizens now have the power to do what the politicians refused to do. Measure 43 is good policy and it will work. Those that tell you otherwise are just playing politics.

Oregon law enables a young girl to have an abortion without her parent’s knowledge. When sexual abuse has occurred, under current law the abuser can drive his pregnant teenage victim to a clinic, pay the abortion fee, and drive her home with no one the wiser. Ballot Measure 43 will stop such sexual abuse from reoccurring, and bring the culprit to justice.

But what about the girl who, for whatever reason, cannot talk to her parents? Ballot Measure 43 provides a young and inexperienced girl immediate and private access to an independent government representative. After determining the girl understands the nature and consequences of her decision, this concerned adult has authority to give permission in place of her parents. Once again, by talking to a concerned adult, if the pregnancy was caused by sexual abuse, the girl’s abuser can be brought to justice.

My wife and I have raised eight daughters and we now have the privilege of watching our granddaughters grow up. Our hearts reach out to those parents who are left to pick up the emotional pieces of their daughter’s broken hearts, without knowing the cause of her deep-rooted depression, self-doubt, and sometimes suicide.

We need to protect young pregnant girls from continuing sexual abuse while respecting relationships between parents and their daughters.

If you want additional information on this important issue for parents, girls and families, see my special Measure 43 page on my website.

Obviously, I will be voting Yes on Measure 43. If you continue to be uncertain as to your position, please take the time to review the information, so you can make your own informed decision on this important issue.