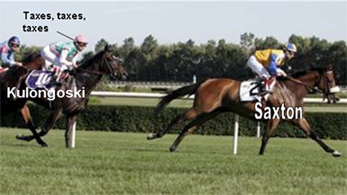 1. Poll lead: A new Riley Research poll has Saxton ahead 39% to Kulongoski’s 37%. This poll reconfirms other polls which show Saxton continuing to plow upwards. The poll sampled only likely voters.

2. Fundraising lead: New campaign financial reports put Saxton ahead of money raised in the campaign by nearly double. Saxton raised $3.5 million and Kulongoski raised $1.65 million. If we include the half-million raised from the Republican Governors Association, Saxton’s funds jump to $4 million!

3. Debate performance: Anyone who saw the governor’s debate last Thursday on OPB can see that Kulongoski seams desperate. The governor kept unloading new government programs like he was a manic Santa Claus with a self-esteem problem. During the Medford debate it appears Kulongoski is trying to backtrack on his taxes. The Medford Mail tribune commented “He said he has not resorted to new taxes, while acknowledging he has supported tax measures.” Kulongoski’s tenure has been all about raising taxes, voting for taxes, and now he has proposed three new taxes in the past five months (Cigarette, Sales tax, and kicker tax grab). It appears Kulongoski is backtracking.

Saxton has been running on good governance and on a taxpayer friendly platform that deeply resonates with voters. This explains his lead — which has made Oregon’s governor race the most competitive in the nation for a sitting incumbent.