Sources inside the Oregon Governor’s Office of Film & Television have revealed that they are in discussions with a major studio that is filming a remake of Stanley Kubrick’s 1999 film Eyes Wide Shut – Kubrick’s last film. Those same sources have indicated that Oregon’s Sen. Floyd Prozanski has been cast in the role of Dr. William Harford, a character played by Tom Cruise in the 1999 version.

One of the remake’s producers is Hollywood heavy weight Jack Nicholson, who has made films before in Oregon. Nicholson has remained friends with the family of Ken Kesey. Kesey wrote One Flew Over the Cuckoo’s Nest and Nicholson starred in the 1975 film adaptation, which was filmed in Oregon. Nicholson and Kesey became friends while working on the film project.

Jack Nicholson also worked with Stanley Kubrick in the 1980 film The Shining – which has an exterior shot of Timberline Lodge.

During one of the meetings with writers and Oregon Country Fair historian Suzi Prozanski, Suzi’s husband state Sen. Floyd Prozanski came in to talk with his wife and the casting director blurted out “That’s him! That’s Dr. William Harford!” Taken aback at first, Sen. Prozanski finally managed a reply “Well, I’ll think about it. To be honest, it’s not the first time I’ve been mistaken for Tom Cruise.”

The film will be set in the iconic Oregon Country Fair, where Dr. Harford meets the dark and enigmatic Tex – a member of the elite Fair Family. Tex guides Dr. Harford through the complex maze of insider wristbands and secret passwords that allow him to enter their Eyes Wide Shut world. Where the fair transitions from the faerie wands and fair magic that permeate the daytime into the different type of magic that permeates the infamously wild nights.

Once made, the Eyes Wide Shut remake will join a long list of movies that have been filmed in Oregon, including Twilight, Mr. Brooks, The Hunted, The Postman, Mr. Holland’s Opus, Maverick, Point Break, Kindergarten Cop, Stand by Me, Short Circuit, The Goonies, Animal House, One Flew Over the Cuckoo’s Nest, Five Easy Pieces and Paint Your Wagon.

Sen. Prozanski said he’s proud to be part of something that brings much needed revenue into the Oregon economy. He went on to add that he doesn’t want to be typecast, and so may do an action picture next. He revealed that he and his agent have been exploring a remake of Rambo as his next acting vehicle.

To view an advance copy of the script on Gawker Media, as well as the Summer 2014 Oregon shooting schedule, click here. 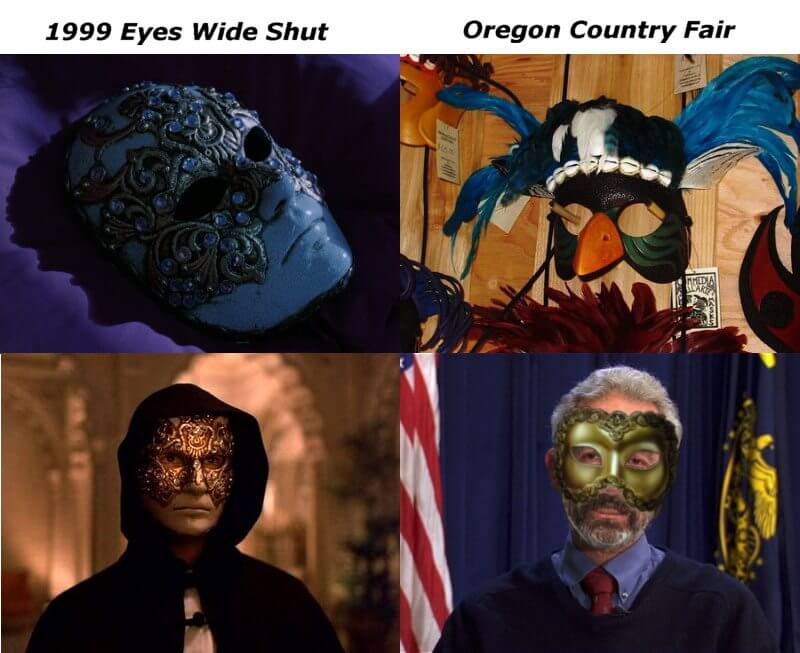