By State Representative Dennis Richardson,
[Catalyst note: This article starts out talking about seagulls and then delves into solid data and budget facts worth your read]

Years ago the Reader’s Digest carried a story about a shrimp boat fleet in St. Augustine. Each day, when the shrimping was done, as they headed back to harbor the men would clean the catch on the stern of their boats. Huge flocks of seagulls would swarm behind the boat, dipping and diving as they scrambled for an easy meal. This practice went on for many years and the seagulls loved it. The food was plentiful and easy to catch. One day the seagulls stopped getting fed. The St. Augustine shrimp boats had moved away, and, as a result, hundreds of seagulls were left starving. For generations the seagulls had been fed the scraps tossed from the shrimp boats and had lost their aptitude for fishing. Parent seagulls had failed to teach their young ones how to fish, and the young ones grew up and did the same. In short, the shrimp boats had become the seagulls’ “entitlement” system and the gulls, over time, lost their ability to provide for themselves. (Fable of the Gullible Gull, Reader’s Digest, Oct. 1950, p. 32)

The Oregon unemployment statistics for August show Oregon’s unemployment rate has climbed back up to 12.2%. (Click here) The significance of Oregon’s high unemployment is evident from the following historical graph: (Click here.)
The “Fable of the Gullible Gull” has a moral for our State and for us. Like the story of the seagulls and the shrimp boats, Oregon is now dependent on federal programs, and has lost the independent spirit of its pioneer founders. Oregon now relies heavily on the federal scraps tossed our way from Washington, D. C. For example, Oregon will be receiving $3.9 Billion of one time, federal stimulus dollars to help us through this recession. (Click here.) This money is appreciated, but it adds to our dependence and our vulnerability.

The rationale for providing “stimulus” money in the first place is to “bridge the gap” until the state climbs out of a “V” shaped recession. In a “V” shaped recession, the left side of the “V” graph represents the falling amount of state revenue resulting from a recession””when taxpayers are out of work and businesses are closing, the amount of tax revenues decreases accordingly. The right side of the “V” graph represents the increasing amount of state tax revenues collected as the economy heats up, businesses expand and more people work and pay taxes. Such stimulus or “bridge” money is intended to avert having to make drastic program cuts during a short-term recession. Thus, the federal stimulus money provides a financial support or bridge that maintains programs until the economic recovery occurs and tax revenues increase to restore the needed money for the state. Such stimulus payments only work if the economic recession is short and the economic recovery is dramatic.

A stimulus bridge of $3.9 Billion is huge and will be difficult to replace. Without a dramatic economic recovery in Oregon over the next two years, the federal stimulus bridge will be a bridge to nowhere. Without a strong recovery, those programs funded with federal stimulus money will be left underfunded, in free fall, and the folks depending on them will be in serious jeopardy.

Oregon’s dependence on federal hand-outs goes far beyond the stimulus money. For instance, no health care and human services budget discussions can take place without focusing on how many federal dollars Oregon can leverage through the Federal Medical Assistance Percentages program (FMAP””Click here).

In addition to Oregon, many individuals and families are as vulnerable as were the St. Augustine seagulls. Too many people are dependent on government benefits and pay checks. 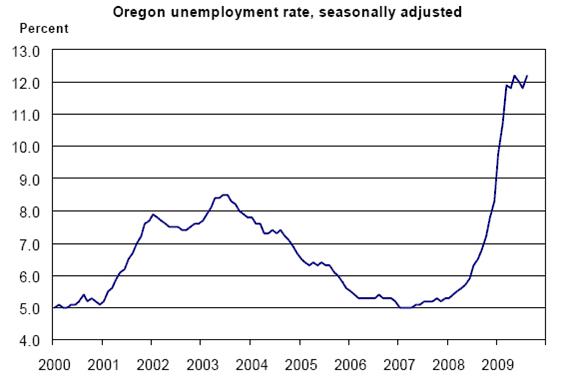 Nearly 240,000 Oregonians were unemployed as of August, 2009. But, the loss of jobs since 2007 has not been shared equally by the private and government sectors. (Click here.)

We should fund and support a government large enough to provide the core programs to ensure public safety for Oregon citizens, performance-based education for Oregon’s students, and human services for Oregon’s citizens who are unable to care for themselves. Unfortunately, Oregon’s programs go far beyond these basic core principles for efficient, effective and economical government, and, to staff the expansion, the number of government employees has grown to an unsustainable level.

I believe we have reached a tipping point where the cost increases of government can no longer be sustained. It is a fool’s errand to think that in two years the private sector can lose 120,000 jobs (jobs lost by workers who previously paid taxes), while the public sector can increase the size of government by 10,000 jobs (dramatically increasing the need for more revenue to pay for them). In essence, when the number of working taxpayers decreases and the size of government increases, the money to pay for the expanding government budgets must come from somewhere — higher taxes, fees, penalties and debt. Oregon relies heavily on income tax revenues and the number of lost private sector jobs, and the tax revenues they generated, are not expected to be recovered until at least 2015.

Oregon’s recent budget increases demonstrate the unsustainability of Oregon’s financial course. The “All Funds” budget for 2005-07 was $40.8 Billion. Two years later, in the 2007-09 Budget, it was increased by more than 25% to $51.2 Billion. Then, two years later, in our current 2009-11 Budget it was increased by another 9.4% to $56 Billion. (Click here.) Increasing a small state, like Oregon’s budget by more than 37% in only four years cannot be sustained. These historic budget increases are depicted in dark blue on the following graph: (Click here.) Even when adjusting for estimated population growth and artificially suppressed inflation figures, the expenditure climb is accelerating. 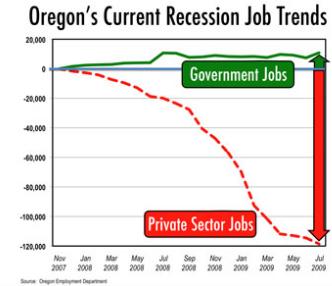 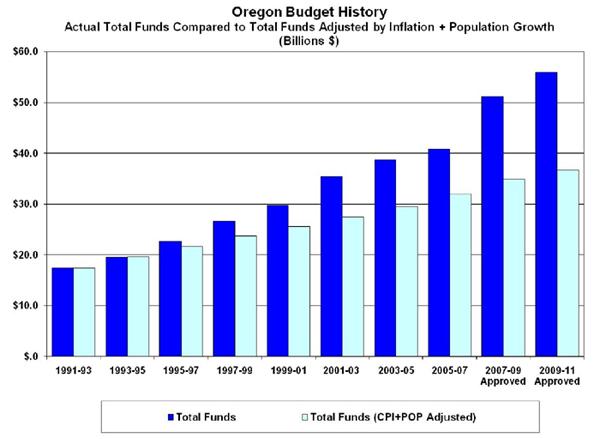 As individuals, families and as a state, we cannot expect to retain our heritage as a free and independent people if we continue to rely on ever-increasing amounts of federal money. The federal 2009 fiscal year ends today. The 2009 federal deficit tips the scales at $1.6 Trillion, the highest level since WWII. (As an aside, at the end of WWII America’s debt was owed to the American people who primarily funded the war with savings bonds. Today, more than half of America’s debt is owed to China, Japan and Arab oil-producing nations.) The Congressional Budget Office (CBO) estimates the additional red ink will reach more than $7 Trillion in the next ten years. (Click here.) Seven trillion dollars represents $23,000 of additional debt for every man, woman and child in America. That additional $7 Trillion is on top of the current $11.7 Trillion of national debt, and fails to consider tens of trillions of unfunded Medicaid, Medicare and Social Security liabilities that will consume an ever-increasing portion of our national budget in the years to come. In short, such spending at both the federal and state levels is unsustainable.

So what can be done?

First, we should ask ourselves hard personal questions:
–What do I believe are government’s core functions, and am I willing to pay for them?
–What services am I willing to forego to lessen the escalating costs of government?
–What charitable responsibilities do I have that should not have been relegated to the government?
–What am I doing to live within my means, increase my own productivity, lessen my debt, increase my savings and become more self-reliant?

Second, we should ask hard questions of our elected representatives and candidates for federal and state offices:
–What do you see as government’s core functions and how should we pay for them?
–What are your plans for reducing expenditures, balancing the budget and reducing government debt?
–What programs are you proposing? What will they cost and how will they be funded?
–What tax cuts are you proposing? What will they cost and will the loss of revenue affect government’s core functions?
Only by recognizing, analyzing and addressing our perilous individual, state and national financial conditions can we avert looming financial disaster. We should make the necessary course corrections now that will restore our financial stability, independence and self-sufficiency.

To do so will require weaning ourselves and our state from excessive dependence on government programs, payments and debt. Such a political paradigm shift will not come easily; it will only come when the people demand it. If not now, then when? We must not continue to be gullible gulls.