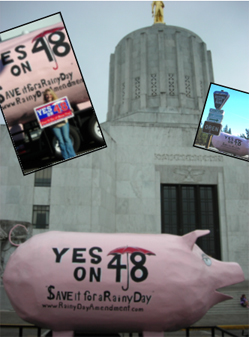 The Rainy Day Amendment committee announced that the Measure 48 piggy bank will be touring all over Oregon. The piggy bank — probably the largest ever seen in the state of Oregon — symbolizes the huge savings that Oregon government will accrue after voters approve Measure 48 this fall. The piggy bank is 16 feet long and stands 10 feet high at the shoulder.

While at the State Capitol, the driver ran into a supporter who acknowledged that as a state public employee he was going to vote for Measure 48. The state worker shared on how he and his fellow workers feel frustrated at the waste they see in their own department and that nothing is ever done about it. He offered an example on how the State purchases expensive equipment and items that it never uses.

Rainy Day Amendment Committee member John Sherman of Gleneden Beach said, “Lincoln County voters should welcome this giant piggy bank with open arms. For too long, the State Legislature has spent every dollar available, and saved nothing for a “˜rainy day.’ This piggy bank should remind all of us that Measure 48 will place a reasonable limit on spending, and put the voters in charge if the Legislature tries to overspend again.”

The State estimates that passage of Measure 48 will create at least $1 billion of savings that could be used as “rainy day” funds. These dollars would be available to continue funding needed programs should the state’s economy take a downturn.