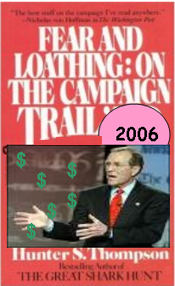 Now that the political season is in high gear, there are too many subjects to cover with full columns and so I have chosen a number of vignettes that you might otherwise miss in the mainstream media.

The King of Hypocrisy

Regardless of the outcome of the gubernatorial election, Ted Kulongoski will certainly earn the title of “King of Hypocrisy.” Kulongoski recently released a series of campaign ads attacking Ron Saxton for accepting campaign donations from business – most of which are located right here in Oregon and provide jobs, community stability and tax revenues – lots of tax revenues. Kulongoski claims that Saxton is “bought by and beholden to special interests.” Roget’s Thesaurus II, Third addition describes “hypocrisy” thusly:

:A show or expression of feelings or beliefs one does not actually hold or possess: pharisaism, phoniness, sanctimoniousness, sanctimony, tartuffery, two-facedness….”

The opponents of Measure 40 – the citizens initiative, signed by over 170,000 people, to require the election and appointment of supreme court judges from districts across the state – have raised approximately $58,000, according the most recent Contribution and Expenditures reports. Predictably, all but $1700 of it was provided by lawyers in that narrow corridor between Portland and Eugene. (Five hundred dollars of that $1700 came from a Seattle based law firm with offices in Portland.) Included in the amounts raised is $14,500 from the current Court of Appeals and Supreme Court judges (job protection), $5000 from the Multnomah (Portland) bar association and $5,000 from the Oregon Trial Lawyers. Not surprisingly, that is also the same narrow corridor from which virtually all (save one) of the current Supreme Court justices have been installed – usually by the unbroken string of liberal Democrat governors. Here is another instance in which special interest groups are hell-bent on preserving the status quo to their eternal benefit.

Early polls show broad and winning support for Measure 39 – the citizen initiative to stop the latest government land grab. Measure 39 is the fix for the recent United States Supreme Court decision in Kelo v. City of New London which allowed local government to use condemnation (eminent domain) to take one person’s private property for the sole purpose of transferring it to another person who will develop it and pay more taxes on the new development.

Apparently the City of Coos Bay can also read the polls and recognize that they are about to lose the ability to force current landowners off their land so that it can be transferred to wealthy developers. As a result, the city officials were scheduled to vote Wednesday evening to begin condemnation proceeding against an elderly Coos Bay resident in order to transfer his tract of land to a developer so that it can build a “big box” store for Lowe’s – the national hardware giant and chief rival to HomeDepot. By commencing the process now, the city believed it could complete the condemnation prior to election day and thus avoid the requirements of Measure 39. But what the city officials got was a public uproar. Citizens turned out in droves to protest the proposed action and to support Councilman John Muenchrath vociferous condemnation of the proposal. As a result, the city council reversed its field and voted not to condemn the land. Measure 39 is already having an effect on local governments even before the votes are tallied.

What Office Are You Running For?

Polling over the spring and summer months indicated that when Gov. Kulongoski spoke out against the war in Iraq and criticized the Bush administration for its foreign policy, his numbers rose. In contrast, when the debate focused on his performance as governor, and particularly his lack of leadership and his support of multiple tax increases and more government spending, his numbers went down. As a result, Ted spends a lot of time talking about the war, foreign policy and the Bush administration. The problem is that the governor of Oregon doesn’t have a darn thing to do with the conduct of the war – or foreign policy for that matter. The governor is elected to run the state of Oregon, create and manage budgets, oversee the development and delivery of state services, and be mindful of taxpayers dollars. In all of these instances, Gov. Kulongoski has had a less than sterling performance. But in the world of politics, if you don’t want to defend your own performance, then attack someone else’s performance. Ted, focus, please. You are running for governor – not president.