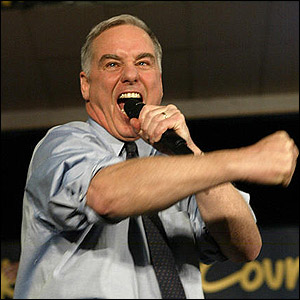 Howard Dean is in Portland today with Governor Kulongoski. This is a perfect time to remind the public on some of Dean’s famous and hilarious quotes.

“I think with a lifetime appointment to the Supreme Court, you can’t play, you know, hide the salami, or whatever it’s called.”

“We’ve gotten rid of (Saddam Hussein), and I suppose that’s a good thing.”

“I still want to be the candidate for guys with Confederate flags in their pickup trucks.”

“This president is not interested in being a good president. He’s interested in some complicated psychological situation that he has with his father.”

“You think people can work all day and then pick up their kids at child care or wherever and get home and still manage to sandwich in an eight-hour vote? Well Republicans, I guess can do that. Because a lot of them have never made an honest living in their lives.”

“You know, the Republicans are not very friendly to different kinds of people. They’re a pretty monolithic party. Pretty much, they all behave the same, and they all look the same. … It’s pretty much a white Christian party.’

“There’s not one person in this crowd who’s gonna agree with everything I say. Not one. ”

“You think the Republican National Committee could get this many people of color in a single room? Only if they had the hotel staff in here.”