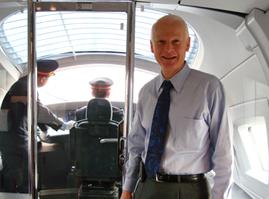 As you may recall, Part 1 of this report on the Oregon 2009 Legislative Delegation to China discussed timber management for Oregon and her sister-state in China, Fujian Province. (Click here.) Today’s newsletter focuses on China’s high-speed bullet train and Oregon’s equivalent, Amtrak’s Eugene to Portland commuter service.

High Speed Bullet Trains””200+ MPH. Our Oregon delegation met with the Port of Tianjin for three reasons: (1.) to promote with Tianjin port authorities a closer alliance with the Port of Portland; (2.) to promote greater utilization by Tianjin shippers of the Port of Portland’s excellent facilities; and (3.) to learn about the renovation and increased capacity of Tianjin, the world’s fifth most active port. Traveling from Beijing to Tianjin required our delegation to ride China’s new Beijing-Tianjin bullet train.

The Beijing-Tianjin high speed train is one of the fastest bullet trains currently operating in the world. This sleek, 21st century train cruises on rails at speeds of 325-350 kilometers per hour (that’s 202 — 218 mph), and has been tested at speeds approaching 500 kph (300+ mph). During our short trip, I saw the digital speedometer reach the blazing speed of 338 kph (210 mph). It was an amazing trip. Four of our train’s eight sleek, space-age cars, had electric motors, powered by overhead electric wires. The four powered cars had spring-activated, hinged arms that arched upwards against the wires above. The aerodynamic design of the train, along with the inherent quietness of its electric motors, created a surreal experience, where we sat in near silence as the terrain flashed by the windows at 210 miles per hour. Eighty-five percent of the track was above ground (essentially everything except the approaches to and from the train stations). Thus, since the high-speed train travels on a super-long concrete overpass, there are no concerns about cross-traffic, loose cattle or other obstructions that could cause a catastrophe at such high speeds. The entire 125 kilometer distance from China’s Capital City of Beijing to its nearest coastal city and port, Tianjin was traveled in less than 25 minutes.

We Americans might wonder why China, Japan and various European nations are leading the world in high-speed train travel, while the U.S.A. is side-tracked with Amtrak. The answer is based squarely on economic viability. Such an investment simply does not pencil out in a large country with a dispersed population. The economics of a billion dollar bullet train require a large, dense population base of commuters who will regularly ride the train.

There are eight Beijing-Tianjin bullet trains that carry 40,000 passengers daily, at an average ticket cost of roughly $10. If every passenger paid $10 per ticket, the route’s eight high-speed trains generate revenues of $400,000 every day. By contrast, the Eugene-Salem-Portland Amtrak daily commuter service has an annual ridership of approximately 114,000 (less than 3 days worth of the Beijing-Tianjin ridership). The cost to ride Oregon’s Amtrak line is about $7.50 per ride for daily business or student commuters who buy a monthly pass ($22 is the advance ticket rate, and $37 at the gate). Although it is difficult to obtain Amtrak’s financial details, ODOT’s Rail Division indicates every ticket for Oregon’s Amtrak train costs $83. Oregon’s portion of the ticket subsidy is at least $38. (Click here.)

In short, the U.S. is a large country with a relatively sparse population, especially in the western states. Unless President Obama’s Stimulus Plan foots the bill to build an American bullet train and the taxpayers are willing to pay huge subsidies to keep it running after it is built, we cannot expect to ride an American bullet train in the foreseeable future.

The unemployment statistics for October have just been released; it has climbed to 10.2% from 9.8% in September. (Click here.) Although the national unemployment rate is still less than the 11.5% September unemployment rate for Oregon, the trend is not good news for those touting a quick economic recovery.

To put these unemployment rate percentages into perspective, the current recession has resulted in a loss of approximately 10.5 million jobs nationally. By contrast, in the booming 1990’s, the highest number of new jobs created in a single year was 2.5 million. The 1990 tech-bubble expansion years are gone, so the conclusion is unavoidable — if everything goes well, it will take at least 4-5 years before the U.S. can return to the same level of employment enjoyed before the economy tanked.

Oregon is in a similar situation. Oregon has lost 124,300 jobs since December 2007. The average annual increase in new jobs from 1991 to 2008, including the boom years of 1994-97, was 25,000 jobs per year. Thus, if the recession were to end today (which is not happening), and Oregon were to begin creating 25,000 new jobs each year, it would take five years before as many Oregonians would be employed as were working two years ago. How can we regain or replace those lost jobs? Oregon must become an attractive place for private sector employers to live, invest and do business. There is no other way.

Next Week–Part III. Preparing Oregon Students for the 21st Century Global Economy. Next week I will complete Part III of my 2009 Oregon — China Delegation Report. The evidence is irrefutable that China is on track to be the dominant global economy of the 21st century. With foresight, Oregon students willing to learn Chinese will be better prepared to participate in such an Asian led global economy. Part III of this report will focus on Chinese language and cultural instruction for Oregon students. It will consider the question, “if China were offering to send experienced Chinese teachers to Oregon schools to teach Chinese language classes at minimal costs to the schools, would it make sense for Oregon schools to take advantage of such an opportunity? Such programs exist and are being offered with open arms to Oregon””America’s future gateway to the Orient. We will discuss the Confucius Institute Program, Confucius Classrooms and Voluntary Teachers Program.