ALBUQUERQUE, N.M. — Paul Domski is a falconer and a bird lover. And he really doesn’t like wind farms or the federal government’s recent decision to protect wind energy companies for up to 30 years for killing eagles.

“If I was the country’s energy czar I’d get rid of (wind farms),” said Domski, who is also the Mountain Region director of the North American Falconers Association. “From an avian standpoint, from a biological standpoint, they’re a disaster.” 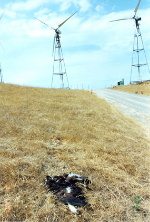 DANGEROUS FLIGHT: Feds give wind farms up to a 30-year permit to escape penalties for the deaths of eagles.

Domski was one of a few dozen people to show up Tuesday night at a “public scoping meeting” on eagle management by the U.S. Fish and Wildlife Service — one of five meetings the agency is hosting across the country to gather comments about possible changes to the agency’s regulations.

One of the hottest topics is the 30-year permit the USFWS approved last December.

“The span of time that a wind project is operational is about 30 years,” Brian Millsap, the USFWS national raptor coordinator told New Mexico Watchdog. “So a five-year permit only covers them for one-sixth of a project’s life.”

Environmentalists are split when it comes to wind farms — embraced by some as a big part of the country’s renewable energy portfolio but disliked by others because of the number of birds that are killed by the turbines spinning in the wind.

“They look like they’re going slow,” Domski said, “but at their tips, they can move as fast as 150-160 miles an hour, and they just kill the birds.”

The actual numbers of birds that are killed each year is hard to determine, but last December, a study published in Biological Conservation estimated between 140,000-328,000 fatal bird collisions each year at wind farms.