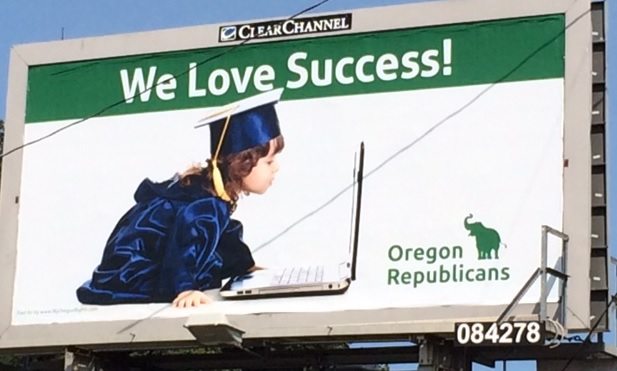 This week a local group of Republicans in Clackamas County put up this billboard. A spokesperson for the group said that they are tired of the media saying negative things about the Republican Party. He went on to say that the average voter has no idea all the fantastic things the Republican Party has accomplished over the last 200 plus years. Just to name a few:

Republicans are responsible for: Ending slavery, building schools in the south for African Americans and poor whites, women’s right to vote, African American’s right to vote, Yellowstone National Park, the 14th Amendment, the 1964 Civil Rights Act, proposing and fighting for the balanced budget amendment. Republicans even proposed giving land to freed slaves so they could support themselves (Democrats prevented this from happening).

The group believes that Democratic policies favor very small special interest groups at the cost of the majority and that Republican policies promote “hand ups” instead of “hand outs”.

“Tyranny is when the rights and freedoms of the majority are sacrificed for the desires and privileges of the few.”

You can learn more at: www.MyOregonRights.com. Billboard at Hwy 212 east of I-205