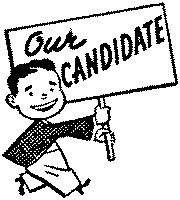 The campaign season seems to bring out the most outrageous conduct in people and there are just too many stories to do them all justice. So again this week, here are a number of vignettes describing life on the Oregon (Campaign) Trail.

Hell Freezes Over In Portland

To understand this you have to look at the political demographics of Portland. Tim Hibbitts and Adam Davie of Davis, Hibbitts & Migdahll, Inc., two of Oregon’s premier pollsters, describe Portland thusly, “Twenty percent conservative, 20 percent moderate, 40 percent liberal, and 20 percent ultra-liberal. And the leftists drive the climate, the agenda.” Adams goes even farther by noting that somewhere near forty percent of Portlanders are anti-everything – anti-money, anti-cars, anti-free trade, anti-growth, even anti-Starbucks. And the climate is so decidedly liberal that any variance from the program is met with instant and vociferous protest. In Portland, if you don’t agree with the uber left’s agenda all of the time, you are the “enemy.”

And that is the reason that poor old Bob Caldwell, The Oregonian’s editorial page chief, found himself writing a defense of the Saxton endorsement the following week. Bob felt compelled to exonerate the rest of the editorial board by noting that it was his decision – admittedly made after consultation with the other members of the editorial board – but his decision alone. I count Bob Caldwell as one of my friends – I hope he thinks the same of me. Whether I agree or disagree with Caldwell, I know him to be a decent, thoughtful, and well-studied person. For The Oregonian to depart from over twenty years of endorsing Democrat gubernatorial candidates speaks loudly about the direction of Oregon. Caldwell and The Oregonian acknowledge that Oregon is headed in the wrong direction and is in need of change. Most succinctly, Caldwell noted that “change begins at the top” and, in this instance, the agent for change is Saxton.

I’ve never seen a time in which The Oregonian has felt compelled to justify its editorial views. But in the land of the latte liberals, dissent is not countenanced. Caldwell’s explanation was interesting, but it would have been more appropriate if he would have just said, “Bite Me.”

There are new political ads now out in which both Gov. Kulongoski and Senate President Peter Courtney (D-Salem) are taking credit for the passage of “Jessica’s Law” – a bill to increase prison terms and post-prison supervision for those convicted of sexual assault of children under the age of 12. But you all may remember that in my column on September 18, 2005, I wrote the following:

“Which brings us to House Bill 3507 – a version of Jessica’s Law to increase prison terms and post-prison supervision for those convicted of sexual assault of children under the age of 12. The bill was introduced by a bipartisan group of legislators in the Republican-controlled House, where it passed by a 51-9 margin (seven of the nine opposing the bill were part of Portland’s uber left contingent). The bill was sent to the Senate and there the Democrat leadership refused to assign it to committee or give it a hearing. A group, led in part by Sen. Jason Atkinson, gathered the signatures of two-thirds of the state senators requesting a hearing and an opportunity to vote. But the Democrats, under the leadership of Sen. Kate Brown, the godmother of Portland’s uber left, refused.”

Peter Courtney was part of that Democrat leadership that refused to allow consideration of Jessica’s Law during the regular session. And Gov. Kulongoski sat on his hands and did nothing. It was only after Bill O’Reilly targeted Oregon’s politicians for the scorn they so richly deserved that Kulongoski caved in and included Jessica’s law in the call for a special session. But, in the world of politics, apparently there is no shame in taking credit for that which you resisted.

The public employee unions are out in force this election season and they are spending a ton of dough. Not only are they the driving force in Ted Kulongoski’s campaign, but they are responsible for a large share of the money opposing Measures 41 (the measure to restore personal exemptions for state taxes at the same level as federal taxes) and Measure 48 (spending limits). That’s to be expected since both measures would curb government growth and the public employees unions certainly don’t want that. But what is laughable is how predictable their message is for opposing both measures. It is the same message that they used when they opposed Measure 5 limiting the growth in property taxes, the same message they used in supporting the tax increases under Measures 28 and 30, and the same message they use when they urge local tax increases and bond measures – schools will close, teachers will be fired, the elderly will be tossed out into the street and crime will run rampant because jails will close and police officers will be fired. And it is still all a load of baloney. State government is awash in money. There is over $2 Billion more in revenues for the next biennium than there is for the current biennium. The only thing then, and the only thing now, that can cause all of this mayhem is if the public employees unions continue to insist on salary increases at the rate of six percent per annum (private sector growth is about three percent) and Oregonians are asked to continue to fund the exorbitant PERS and health insurance benefits for public employees.

Somebody call the public employees unions and tell them to get a new act.